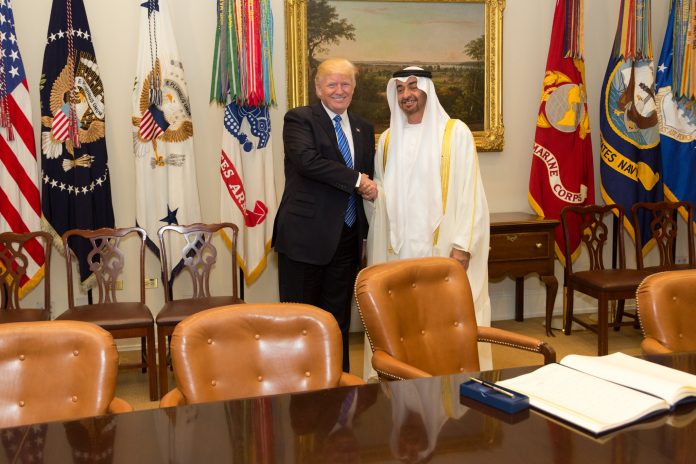 The New York Times seems to publish a book-length love letter to MbZ about every six months, letting us all know that he may have faults but that one must back dictators in nations where Islamists would win in legitimate elections. I imagine you’re not supposed to be reminded of how necessary and moral it used to be to back Islamists to fend off Commies.

Here’s an actual section headline and text excerpt from the New York Times:

“Most Arab royals are paunchy, long-winded and prone to keep visitors waiting. Not Prince Mohammed. He graduated at the age of 18 from the British officers’ training program at Sandhurst. He stays slim and fit, trades tips with visitors about workout machines, and never arrives late for a meeting. American officials invariably describe him as concise, inquisitive, even humble. He pours his own coffee, and to illustrate his love for America, sometimes tells visitors that he has taken his grandchildren to Disney World incognito. . . . The United Arab Emirates began allowing American forces to operate from bases inside the country during the Persian Gulf war of 1991. Since then, the prince’s commandos and air forces have been deployed with the Americans in Kosovo, Somalia, Afghanistan and Libya, as well as against the Islamic State. . . . He has recruited American commanders to run his military and former spies to set up his intelligence services. He also acquired more weaponry in the four years before 2010 than the other five Gulf monarchies combined, including 80 F-16 fighters, 30 Apache combat helicopters, and 62 French Mirage jets.”

According to the U.S. State Department in 2018, “Human rights issues included allegations of torture in detention; arbitrary arrest and detention, including incommunicado detention, by government agents; political prisoners; government interference with privacy rights; undue restrictions on free expression and the press, including criminalization of libel, censorship, and internet site blocking; substantial interference with the rights of peaceful assembly and freedom of association; the inability of citizens to choose their government in free and fair elections; and criminalization of same-sex sexual activity, although no cases were publicly reported during the year. The government did not permit workers to join independent unions and did not effectively prevent physical and sexual abuse of foreign domestic servants and other migrant workers.”

This guy is considered “one of the most powerful men on Earth” by the New York Times and one of the “100 Most Influential People” of 2019 by Time Magazine. He was educated at Gordonstoun, a school in Scotland, and at the Royal Military Academy Sandhurst where he was buddies with a future king of Malaysia who isn’t even in this list. The Crown Prince seems to get on well with Donald Trump.

He’s built the first nuclear reactor in the UAE with U.S. help and basically none of the U.S. concern or horror that has accompanied Iran’s nuclear energy program.

Meanwhile, his buddy the Vice President and Prime Minister Sheikh Mohammed bin Rashid Al Maktoum has, according to a British court ruling, been kidnapping and torturing his own daughters.

The United States bases troops in the UAE and provides the UAE military with weapons and training. What could be more perfect — especially if you don’t pay U.S. taxes and don’t have an interest in the sustainability of humanity?