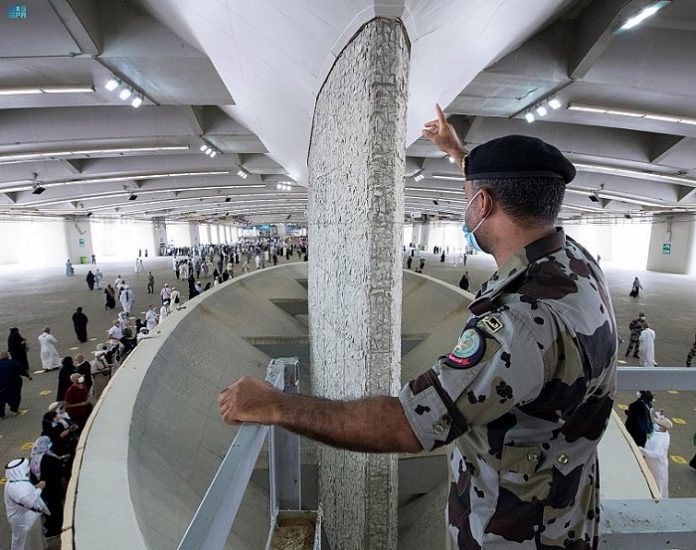 Mina (UNA-OIC) – Pilgrims flock Wednesday, the first of Tashreeq three day, to throw pebbles at the Jamarat facility, amid an integrated system of services and extensive precautionary measures, to ensure their safety and to enable them to perform the rituals in ease and tranquility.

The security spokesman for the Saudi Ministry of Interior, Col. Talal Al-Shalhoub revealed that the implementation of the third phase of the pilgrims’ accommodation in Mina is carried out today and during the Tashreeq says. The pilgrims throw pebbles at the three sites of the Jamarat, in accordance with approved grouping operations and regulations that ensure the achievement of physical distancing and other precautionary health measures.

Al-Shalhoub stressed that the parties participating in the Hajj season will continue to perform their tasks to provide all services to the pilgrims in Mina until their departure on the third of the Tashreeq days.

The pilgrims throw pebbles at the three Jamarat, beginning with the small, then middle, and Jamarat al-Aqaba, in pursuit of the Prophet’s tradition.

The Jamarat is an important site, which consists of three stone columns that are pelted as a mandatory Hajj ritual in imitation of the Prophet Ibrahim (PBUH). These pillars symbolize the three sites where Ibrahim pelted the Satan with stones when he was trying to discourage Abrahim from sacrificing his son Ismail (PBUH).