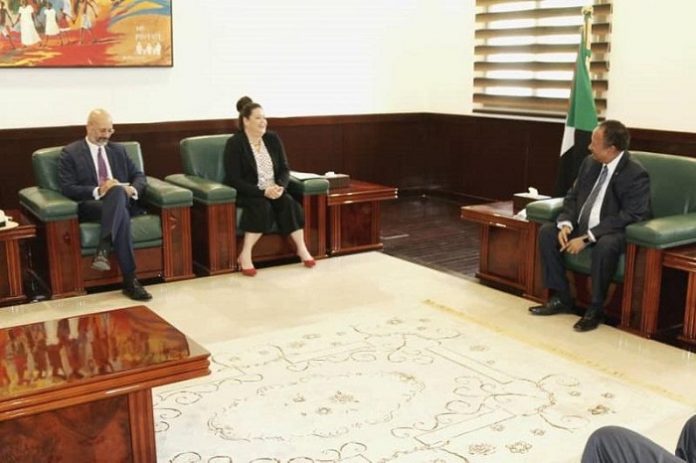 Khartoum (UNA-OIC) – Sudanese Prime Minister Dr. Abdalla Hamdok praised the role of French President Emmanuel Macron in having Sudan removed from the State Sponsors of Terrorism list, cancellation of Sudan’s debt to France, and enabling Khartoum to reach the point of decision-making regarding the debt write-off issue.

The prime minister made the remarks as he received French Ambassador to Sudan Emmanuelle Blatmann, who called on him at his office on the occasion of the end of her tenure in Sudan. The audience was attended by the Advisor to the Prime Minister on International Partnerships, Omer Gamar-Eddin.

Hamdok stated that France’s positions towards Sudan contribute to supporting the country’s peaceful transition to democracy and stability. He lauded France’s organization of the Paris Conference, which enabled Sudan to return strongly to the international community, and highlighted the investment opportunities in the country

The prime minister also appreciated the increase in the volume of trade and cultural exchange between the two countries.

For her part, Ms. Blatmann commended the level of cooperation with the Sudanese authorities during her term in Sudan, citing some of the achievements, most notably the tenfold increase of the French aid to Sudan and the success of the Paris Conference.