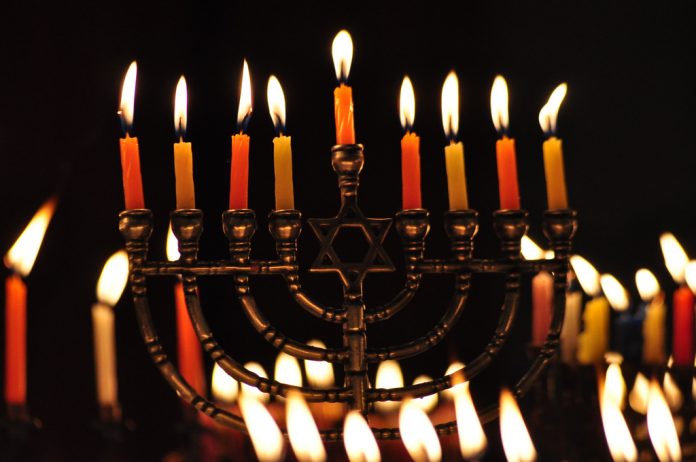 On the eve of Chanukah, December 2nd, the New York Times chose to publish an article entitled “The Hypocrisy of Hanukkah“ by Michael David Lukas. It is worth exploring not only because of the way it reveals the shallowness of contemporary forms of Judaism that are more about identity than about belief and boiled down to please a mild form of liberalism, but also because of the way it reveals how ill-suited contemporary liberalism is to understand the appeal of right-wing nationalist chauvinism and hence to effectively challenge it.

Lukas portrays the problem of contemporary nonreligious Jews in face of the powerful and pervasive symbols of the music of Christmas. Like most Jews, he doesn’t believe in the supposed miracle of a light that burned for eight days, so he digs deeper and what he finds outrages him: that Chanukah was, in his representation, a battle between cosmopolitan Jews who wanted to embrace the enlightened thought of Greek culture and a militaristic chauvinistic fundamentalist force, the Maccabees. Since he is sure that those Maccabees would reject him and his liberal ideas and politics, he is tempted to abandon the whole thing, but he decides not to do so because he needs something at this time of year to offer his young daughter who is attracted to Santa Claus, because he thinks that offering his daughter something he personally believes to be worse than nonsense is, as he puts, “it’s all about beating Santa.”

I want to sympathize with his plight but offer some very different perspectives.

Lukas proclaims proudly that he is part of the contemporary assimilationists so he wonders why he should celebrate a victory of the fundamentalists but that he wants to give his daughter a way to resist the pervasive Christian culture in which he is raising her. This should have given him the first clue: it turns out that indeed he is living in a culture which has put down and oppressed Jews for at least the past 1700 years since the teachings of the Jewish prophet Jesus were twisted into becoming the foundation for a Christian world that used religion to advance a colonialist and then imperialist culture which sought to dominate much of the world to the benefit of a small group of white men whose agenda was explicitly to maximize their wealth at everyone else’s expense. To refuse to bow down to the symbols of that culture, still imposed on everyone in this society, not by law but by the powerful impact of the culture and fitting neatly into the message that if you really care for your family or friends you will spend way beyond your means by buying material things that enrich the owners of the corporations. Lukas has become a victim of that culture, and only slightly alters it to participate in the idolatry of the marketplace by giving his consumption a new purpose: to make Chanukah into a pseudo-Christmas, unwittingly undermining the potential liberation thrust of Chanukah.

To get to that liberation message, you have to understand that the religious fanaticism of the Maccabees was generated first and foremost by the oppressive policies of Greek imperialism (not Roman, which he mistakenly identifies as the enemy), and that like America and the West of the past several hundred years, its cultural and scientific strength were used to create a global culture which subordinated the independent farmers of Judeas and most of the other countries of the Mediterranean, teaching them that material rewards and physical prowess represented by the gymnasium and “perfect bodies” (which is why they criminalized the practice of circumcision) would be the best way to enforce their political and economic domination. The reason that rural farmers joined the Maccabean revolt was because the rule imposed first by Alexander “the Great” (conqueror and oppressor), forced them to give so much of their crops to the ruling Syria-baed Seleucid or Egypt-based Ptolemaic Hellenists (2 of the major societies that fought over control of Judea which lay between them) that these farmers were unable to adequately feed and provide sustenance to their families.

But why in Judea and not elsewhere in the Greek and subsequent Roman empires? Because the Jews had the teachings of their Torah that taught them that there was a force in the universe, Yud Hey Vav Hey, (mistranslated as Jehovah or Yahweh but actually meaning the force that makes possible the transformation of “that which is “ into “that which can and should be”) and that force had made it possible to get out of the slavery of Egypt and could again aid them to get out of this latest form of oppression. It was the belief in this force that led them to believe that the power of the ordinary people, once immersed in the enlightenment that this force gave them, that would be “greater than the man’s technology” (to alter slightly the slogan of many liberation groups of the past and the present).

So instead of thinking that liberation lies with those Jews, past and present, who identify with the ruling powers of each historical period, whether that was the Jewish assimilationists of ancient Judaea or the Jared Kushners of our own time who cuddle up to President Trump and his bundle of liars and self-enriching imperialists, Chanukah teaches that there is another path: to utterly reject their system.

Now here comes the big problem: reject them for what alternative? The liberals and universalists of our time, like those of the Maccabean order, did not have a worldview that could include what was good and potentially soul-nourishing in the religious and spiritual cultures of the past. Similarly, the fundamentalists of our own time, Christian, Jewish, Islamic, Hindu, Buddhist, etc. are so deeply outraged at the oppressive role that the dominant global capitalist society and its culture have imposed on the world that they are unable to see the positive parts (e.g. the ideas of human rights and individual liberties, though those terms have mostly been used as a cover of legitimating systems and practices that these groups quite legitimately experience as oppressive).

The rabbis of the Talmud understood this dilemma. They did not want to legitimate the militarism, corruption, and violence of the Hashmonaim regimes that the Maccabees installed in place of Syrian Hellenistic rule, so they created the myth of the oil that burned for eight days and made that the miracle of Hanukah. What they should have done is identify the real miracle: that people can unify against oppression and win against what at first seems like overwhelming odds against the forces that have all the conventional instruments of power in their hands, if and only if they can believe that there is something about the universe that makes such struggles winnable. Don’t call it God if that term offends you, but develop some consciousness that there is something in the universe that makes liberation possible. That something is celebrated when in the darkest and (for many) scariest time of each year many of us light candles of Chanukah, or Christians light the candles celebrating their own version of that force in the birth of a baby who would become a liberator or savior. So instead of capitulating to the logic of the capitalist marketplace and trying to out-buy and out-shine our neighbors, we can embrace the possibility of possibility that Chanukah and Christmas both celebrate. There is nothing hypocritical about that, even if we do that celebration using the melodies and concepts of our own traditions to do so. We cannot beat the fundamentalists unless we have an alternative worldview which acknowledges what is right in their rejection of the dominant materialist cultures of supposedly enlightened societies, but still embraces the potentially liberatory (no it’s not an official word, but it is my word) elements in Western cultures, manifested today in the struggles for human rights and support for refugees while opposing racism and sexism and homophobia and every other form of xenophobia, while purging out of Western societies their insane commitment to endless growth, accumulation of goods, and rejection of any higher meaning to life besides domination over others or the endless pursuit of “winning” and proving ourselves better than others while ignoring the damage we are doing to the earth.