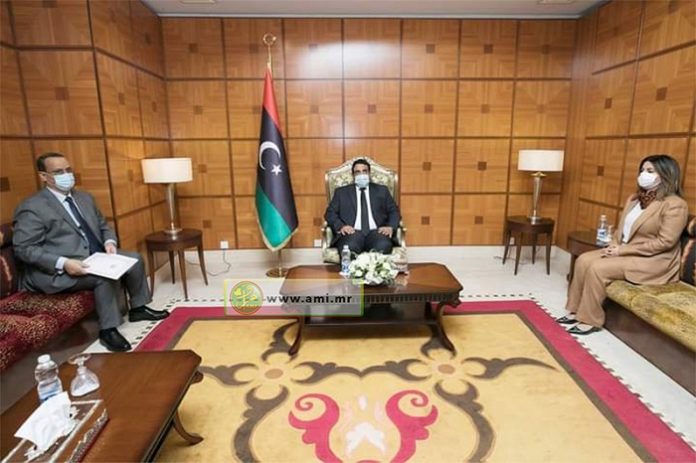 Tripoli (UNA-OIC) – President of Libya’s Presidential Council Dr. Muhammad Yunus Al-Manfi stressed the importance of activating the Arab Maghreb Union (AMU) and supporting its institutions, and called for the resumption of the Union’s meetings.

Al-Manfi made the remarks here on Saturday during his meeting with Mauritanian Foreign Minister Ismaïl Ould Cheikh Ahmed, who delivered to him a message from Mauritania’s President Mohamed Ould Cheikh El-Ghazouani.

A statement issued by the Presidential Council highlighted that Dr. Al-Manfi emphasized that Libya, in its capacity as the current AMU Chair, will do its best to activate the Union in cooperation with the member states. He added that invitations will soon be extended to member countries to resume AMU meetings on various levels.

Al-Manfi and Ould Cheikh Ahmed also reviewed the latest developments in Libya and the functioning of the Government of National Unity (GNU) after its approval by the House of Representatives, so that the new executive authority would establish security and stability, as well as achieving national reconciliation, unification of state institutions and holding the general elections on 24 December 2021.

The Arab Maghreb Union is a trade agreement aiming for economic and future political unity among Arab countries of the Maghreb in North Africa, namely Algeria, Libya, Mauritania, Morocco and Tunisia. The Union has been unable to achieve tangible progress on its goals due to deep economic and political disagreements among its members. Consequently, no high-level meetings have taken place since 3 July 2008.