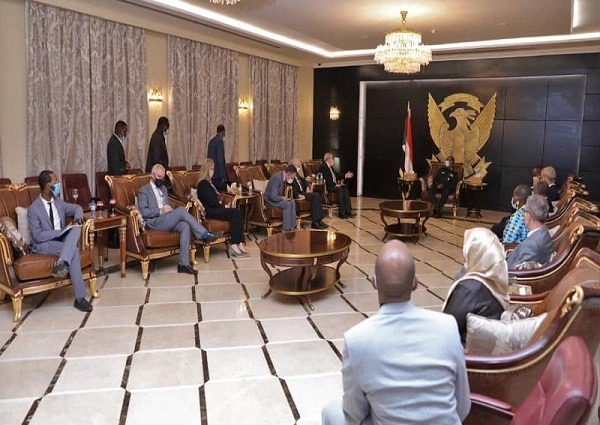 Khartoum (UNA-OIC) – President of Sudan’s Transitional Sovereignty Council (TSC) Lt. Gen. Abdel Fattah Al-Burhan has lauded the efforts being made by the Troika countries (the United Kingdom, United States and Norway) to maintain peace and stability in the country, besides their unlimited support to the democratic transition process.

This came as Al-Burhan met here on Sunday with representatives of the Troika countries, US Envoy Donald Booth, British Envoy Robert Fairweather, and Norwegian Envoy Andre Stansen, in the presence of Norway’s ambassador as well as the US and British chargés d’affaires.

The TSC president pointed out that the signing of the Juba Agreement for Sudan Peace by the Troika as witnesses is a real addition to the support and success of the peace process. He stressed the government’s commitment to implementing the terms of the agreement and complementing the peace file with the Sudan People’s Liberation Movement-North (SPLM–N), led by Abdelaziz Al-Hilu, and the Sudan Liberation Movement led by Abdul Wahid Mohamed El-Nur.

The British Special Envoy said in a press statement that the Troika meeting with the TSC president discussed a number of issues relating to the implementation of the Juba Peace Agreement and the relevant files.