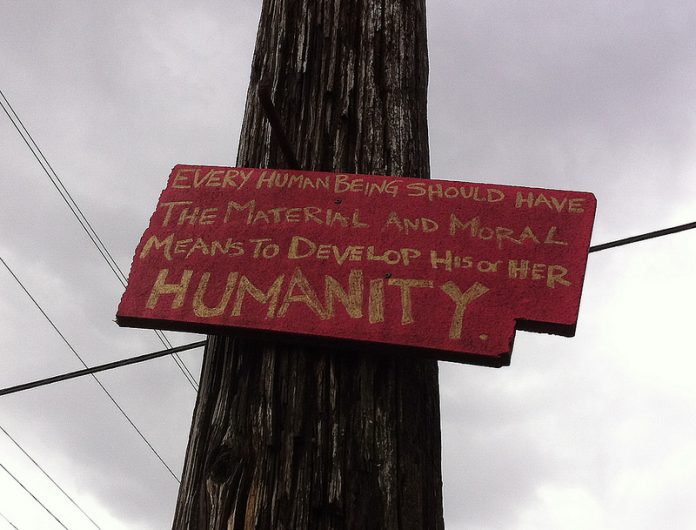 “Only on paper has humanity yet achieved glory, beauty, truth, knowledge, virtue, and abiding love.”

It is tragic that civilized nations have fallen from their lofty calling: namely, human rights for all mankind. There is a sad commentary on the state of human rights all over the globe. It seems to me that until there evolves a generally accepted moral duty among peoples and nations to assist all victims of widespread human rights violations by force or other stiff retaliation, human rights enforcement mechanisms will operate haphazardly and whimsically for reasons unrelated to the harm to the victims or the villainy of the perpetrators. It is the job of all human rights defenders to jump-start that moral evolution.

It might be said that never have so many human rights been proclaimed yet been so routinely violated. Think of the ongoing human rights atrocities at present that are going unsanctioned. Myanmar, where civilians are routinely driven from homes and cities are consistently destroyed. Tragic genocide in Syria. Kashmiris brutalized by 700,000 Indian military and paramilitary forces. The list goes on and on.

The life for Kashmiris has oscillated between grisly and gruesome. Human rights violations are frightful: extrajudicial killings, torture, rape, abductions, arson, and arbitrary detentions. Since 1989, more than 100,000 Kashmiris have been killed. Indian forces routinely commit war crimes with impunity under emergency laws. They do so because the likelihood of punishment by the Indian government is slim to none. The scale of gripping wrongdoing in Kashmir dwarfed what was witnessed in Bosnia, Kosovo, East Timor and Southern Sudan prior to international intervention, yet the United States and the United Nations have watched the Kashmiris suffer like spectators at the Roman Coliseum.

Apart from the magnitude of violence unleashed by the Indian military forces against peaceful protesters in Kashmir, the most poignant aspect of the situation is the acute suffering of the whole population caused by the frequent curfews, disregard of normal life, arrests, detentions and sometimes disappearances of innocent civilians by the authorities. This is a situation without precedent in the south Asian subcontinent and with few parallels in the world today. That complacency gives at least the impression that Kashmiri lives and hopes are worth less than those of others. If India believed its rule in Kashmir was by consent rather than by coercion, it would hold a plebiscite with alacrity, just as the Great Britain routinely permits the Scotland to vote for independence

If, however, the world powers and the United Nations are unmoved by international law and moral justice to act, then Kashmiris will be forced to organize their own referendum like in Catalonia, Spain with the assistance of eminent persons of international standing and NGOs to decide their future. If that last alternative is forced upon them, Kashmiris hope that India, with the urging and moral suasion of the international community, will put no obstacles in the way and that the world will honor the results of the free and fair vote.

It is universally acknowledged that Kashmir is a global danger because of spiraling nuclear and missile proliferation in both India and Pakistan, coupled with their respective domestic political instabilities and historical animosities. A similar consensus agrees that the bilateral India-Pakistan formula for resolving the 70-year-old Kashmir conflict has proven empty, achieving no progress during those long years. For the Kashmir conflict to end, authentic representatives of the Kashmiri people – All Parties Hurriyet Conference — must be senior partners at the negotiating table along with India and Pakistan. No solution will endure without their consent voiced in a referendum.

The gruesome status quo in Kashmir is both legally and morally unacceptable and militarily and economically frightening. There is no time for further complacency.

In sum, the ingredients of a Kashmir solution are there. What remains are healthy doses of statesmanship and magnanimity of world powers including the United States.