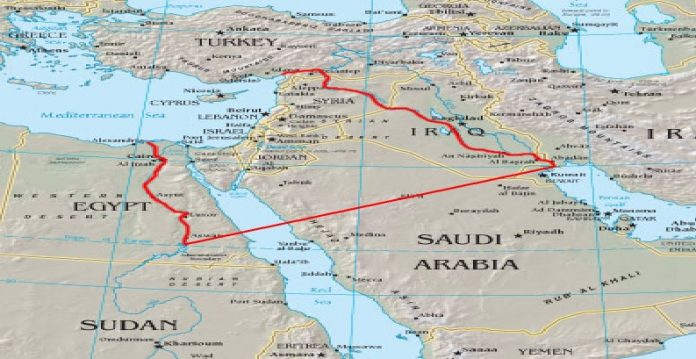 The most disturbing aspect of the U.S.’s subservience to Israel is that it has gone on for so long. Ever since Harry Truman accepted that $2 million bribe to support the “creation” of Israel in 1948, Israel and its multi-tentacled lobbies have extorted hundreds of billions of dollars in military and other forms of tribute, which it uses to terrorize and murder of civilian populations; meanwhile, tens of millions of Americans go without medical insurance, livable housing, honest banking or decent education.

Thanks to the coercive power of the Lobby, the U.S. is no longer even recognizable as a republic. “Congress,” as Pat Buchanan famously observed, “is Israeli occupied territory.” This occupation is so blatant and unapologetic that one might have expected popular uprisings and demands for treason trials long before now, but zionist subversion has become so normalized and pervasive that it is invisible, even accepted, by the mass public.

It is true that some brave Americans denounce the zionization of America and condemn Israel’s genocide of Palestine, but their efforts are largely ineffectual. Much of the reason has to do with language. The shibboleth “anti-Semite”––a meaningless, artificial term––is reflexively hurled to smear anyone who stands up for Israel’s victims or condemns Israel’s atrocities. This intimidation has metastasized throughout all aspects of American (and Canadian) society, which makes the Lobby’s influence by definition totalitarian.

A less obvious, but equally serious, reason has to do with language within the anti-zionist community, especially the abuse of the terms “Jew” and “Jewish”. People on either side of the political spectrum understand these terms emotionally, not intellectually, and apply them in a manner that ends up reinforcing the cult of Jewish victimhood, the most powerful zionist propaganda weapon and the source of the “anti-Semite” slur.

First, the failings of the anti-zionist left are generally common to most so-called leftist agitators. (I say “so-called” because the terms “left” and “right” no longer have any useful meaning in an age of pro-imperial conformity; these terms will be used only for the sake of convenience.) Leftists present themselves as progressives, voices of reason and defenders of free speech, but their commitment to these principles is rather selective. When their dogma or terminology are challenged, even within the leftist community, they respond with cognitive dissonance and hostility and even call for censorship of “offensive” opinions. This hypocrisy is especially prevalent regarding Israel, and I experienced this earlier this year.

In April, I noticed that a bookstore hosted presentations by local authors. I mentioned to one of the owners, Tamara Gorin, that I lived in the area asked if I could give a reading. She said I could, and we settled on the afternoon of June 23. Before leaving the bookstore, however, I made a point of letting her know that my book attracts hostility from pro-Israel zealots in case she wanted to reconsider. Gorin replied that she believed in free expression and that she had previously championed unpopular points of view. As part of our arrangement, she agreed to carry three copies of the third edition of my book, The Host & The Parasite––How Israel’s Fifth Column Consumed America.

My presentation focused mainly on my latest chapter, which deals with the place of the Obama and Trump administrations on the spectrum of the zionization of America. I use the term “zionization” deliberately because in my book and elsewhere I am scrupulously careful not to conflate “zionist” with “Jew”: The former is a political term; the latter is religious. Not all Jews support Israel and many of Israel’s most effective critics are Jewish. In fact, anti-zionist Jewish professors and students have been targeted by the Lobby for their outspokenness.

After the presentation, though, the subject of Jews did come up, but only once and in a tangential sense. In response to a question about why so many Americans favour Israel, I mentioned the phenomenon of Judeophilia­­, also known as philosemitism­­: an affinity among certain Christians for Jews and all things Jewish, including religion. I cited as an example Josiah Wedgwood and James Arthur Balfour, both of whom were British MPs who supported the Jewish banker Lord Rothschild in his ambition to carve out a Jewish “national home” in Palestine. From this analogy, I said many American politicians seek the company and favour of rich and powerful people, many of whom control campaign funding and the corporate media. It just so happens that many of them happen to be Jewish. I should have added at the time that the vast majority, to borrow Thomas Friedman’s expression, are “warm Jews”: Jews who put Israel’s needs first.

The day after the event, I received an e-mail from Gorin asking me to pick up my books. She decided not to carry them because of my mention of Jews, which she said was an attack on people because of their faith. The next day when I went to collect my books I remonstrated rather vigorously that she had misrepresented what I said and by extension accused me of being anti-Jewish even though in no way did I attack anyone’s faith. In any event, her refusal to carry my book made no sense since, as I told her, the subject of Jews is not in it.

During the next 20 minutes, I demanded she demonstrate how I attacked Jews on religious grounds. At length, she admitted that I had not. I then insisted that she honour her commitment to free expression by carrying my book. She still refused.

At issue was not my presentation or my book but Gorin’s hypersensitivity to the mention of Jews. Like a lot of liberal critics of Israel––especially Jews of East European extraction like Gorin––claims of support for free expression are not to be taken at face value. By effectively censoring me, she exhibited the kind of selective moralism that sabotages debate and reduces the so-called liberal left to collaborators with the zionist entity.

For example, J Street, a non-profit, liberal advocacy group in Washington, D.C., claims to advocate for a peaceful, diplomatic end to conflicts between the Arab World and Israel, yet it calls itself “pro-peace” and “pro-Israel.” The concept of irony and self-contradiction is lost on its Jewish founders, one of whom is George Soros, the éminence grise of the Democratic Party, the natural governing party of Israel in the U.S. Advocating for peace while drawing a false equivalency between zionist terrorists and their victims is monstrous and serves only to justify the on-going atrocity.

This hypocrisy was also on display yet again in Canada’s Parliament when an opposition MP asked Liberal Prime Minister Justin Trudeau why his government did not have any reaction to Israel’s demolition of the Palestinian village of Khan al Ahmar, which included the destruction of a school. The question was good and the MP deserves credit for bringing it up, but she also couched her question in the false equivalency of “peace” and “the two-state solution,” which has never been a viable option. Trudeau, like an obedient Israeli satrap, began his answer with, “Canada is a steady ally of Israel” and proceeded to say that his government expressed its “concerns” to the Israeli government, especially regarding the school. He ended with the boilerplate excuse that “unilateral action” would not help “a two-state solution,” as if Israel’s actions were not unilateral.

Pro-peace, leftist, liberal critics of Israel have to do more than call attention to Israel’s atrocities, offer sympathy for its victims and recite delusional boilerplate; they must use language honestly to defend all manner of Palestinian self-defence and categorically denounce Israeli atrocities. If this entails drawing attention to the influence of warm Jews, so be it. The same goes for attacking the cult of Jewish victimhood, which is a matter of politics, not religion.

Before I left, I again challenged her on her hypocritical support for free speech. She conceded there were some topics that were off-limits, one of which is the Holocaust® This was the first mention of religion in this absurd episode. As long as this founding act of sacred Jewish violence is off limits, leftist criticism of Israel will never amount to anything more than a sanctimonious hypocrisy.

South Africa exempts Israel from Visa Requirements but Not Palestinians – Why the Double Standards?

Life expectancy in Brazil up to 76.6 years