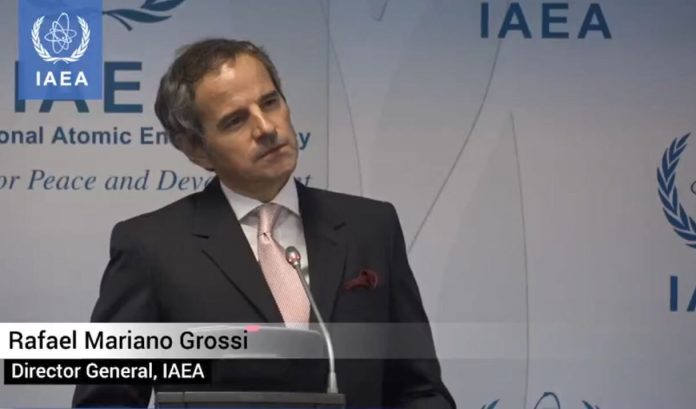 Speaking in the IAEA’s Board of Governors virtual session on Monday, Grossi said that the Agency has not observed any changes to Iran’s implementation of its nuclear-related commitments in connection with its announcement in January that its nuclear program would no longer be “subject to any restrictions in the operational sphere”.

As Iran had also announced that it would continue to cooperate with the Agency “as in the past”, Grossi said that IAEA has observed no changes in the level of cooperation by Iran in relation to Agency verification and monitoring activities under the JCPOA.

“The Agency continues to verify the non-diversion of nuclear material declared by Iran under its Safeguards Agreement. Evaluations regarding the absence of undeclared nuclear material and activities for Iran continue,” he went on to say.

The IAEA chief also raised concern that, for over four months, Iran has denied the agency’s access to two locations and that, for almost a year, it has not engaged in substantive discussions to clarify questions related to possible undeclared nuclear material and nuclear-related activities.

Iran, in its fifth step to reduce its commitments under the 2015 nuclear accord with world powers, announced last year that it would ignore all limitations in the operational arena set by the agreement.

On May 8, 2018, US President Donald Trump unilaterally withdrew from the international deal between Iran and the six world powers.

Then, he re-imposed illegal sanctions against Iran in November 2018, the sanctions which as he said were at the highest level.

Reciprocally, Iran started reducing commitments to the JCPOA from the first anniversary of the US withdrawal.

Tehran’s decision to reduce its commitments to the JCPOA was taken based on Articles 26 and 36.

Then, Iran set a deadline for Europeans to remedy breaches.