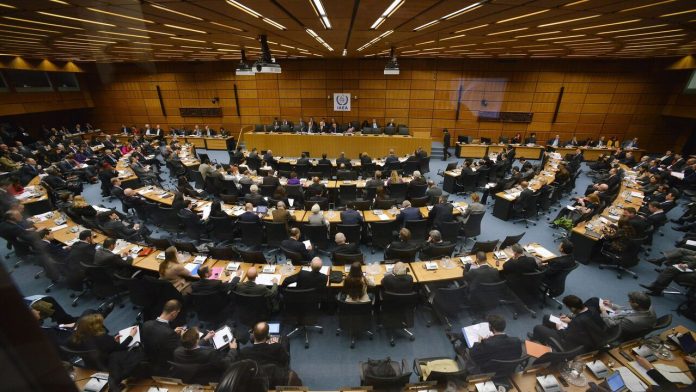 Mohammad-Reza Hosseini said the US has a few scenarios to pressure Iran and take the issue of the country’s nuclear activities to the United Nations Security Council.

Hosseini said that according to the IAEA reports, Iran has had no deviation from the Joint Comprehensive Plan of Action (JCPOA), signed by Iran and the five UNSC permanent members plus Germany, even after the US withdrew from the internationally-endorsed deal.

He said that that even Iran’s reduction of commitments to the JCPOA has been envisaged by in Article 26 of the deal, due to European states inactivity to honor their JCPOA commitments.

The recent statement of France, Germany, and the United Kingdom, also the IAEA resolution claiming that Iran has not had full cooperation and has not given access to two nuclear sites shows that instead of doing its natural duties of verification of data, this international body has become a tool for the US and Zionist regime, the only holder of nuclear weaponry in western Asia.

Regarding the scenarios of pressure on Iran, Hosseini said, the US first scenario was to invoke articles 36 and 37 of the deal to activate the trigger mechanism and eventually push the issue to the UNSC to revive all the five previous sanctions resolutions.

He said that the US intention to use the trigger mechanism has failed because it was opposed by Russia and China and was not welcomed by the Europeans.

The second scenario, according to Hosseini, is to pressure the UN secretary-general to announce that the missiles that hit Saudi ARAMCO were Iranian-made and that they can endanger the region, thus the sanctions must be restored.

And unfortunately, the UN chief fell for it and presented the untrue report, he said.

The international lawyer said that the third scenario includes Europe’s statement claiming that Iran has reduced cooperation with the IAEA and has not been loyal to its commitments over the past year.

The three European states issued the statement at the demand of the US that tries to restore the sanctions on Iran in the UNSC, he said, adding that the next step the US will try to make the UNSC pass a resolution to restore weapon sanctions on Iran. Washington has already given the draft of such a resolution to France, Germany, the UK, and Estonia, and after receiving their comments, it will give it to the remaining members of the body.

He said in the introductory part of the US-written resolution, all the previous resolutions of the UNSC against Iran has been mentioned and openly talks about prohibition of all the UN members, not just the JCPOA members, to have military business with Iran and that all the shipments coming from Iran and going to Iran must be examined.

He also said that the resolution tries to indefinitely limit Iran’s weapons trade.

Hosseini said the US also tries to separate the Resistance from Iran by helping 70 million dollars to Syria and Iraq and to pass a law in the US so that the President will not have the power to remove sanctions on Iran without a yes from the Congress.

Hosseini said that imposing restrictions on conventional weaponry is against the international law unless one country accepts some limitations through a deal or agreement.

Iran has repeatedly announced that it is not seeking unconventional weapons, endorsed by a Fatwa issued by Supreme Leader Ayatollah Seyyed Ali Khamenei.

According to Resolution 2231, the limitations on Iran’s weapons trade will come to an end in October.