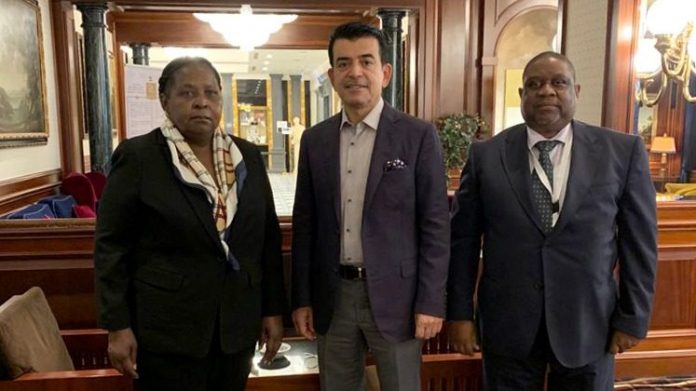 Rabat (UNA-OIC) – Director-General of the Islamic World Educational, Scientific and Cultural Organization (ICESCO) Dr. Salim M. AlMalik held a meeting on Monday with Chairperson of the Parliament of Mozambique Ms. Esperança Bias, on the sidelines of their participation in G-20 Inter-faith Forum, in Bologna, Italy.

The meeting touched upon the prospects for cooperation between ICESCO and Mozambique in the areas of common interest.

During the meeting, AlMalik reviewed the vision and new action strategy of ICESCO. He also highlighted the major initiatives and programs launched and implemented during the COVID-19 pandemic to support the efforts of Member States in countering the negative repercussions of the pandemic, especially on the African continent, which ICESCO gives a special priority.

He pointed out that ICESCO encourages training and building the capacities of youth and women to fulfill their roles in achieving sustainable development for their countries.

For her part, Ms. Bias commended ICESCO’s roles and efforts to support its Member States. She also stressed the importance of building cooperation between Mozambique and ICESCO in the fields of education, science and culture.