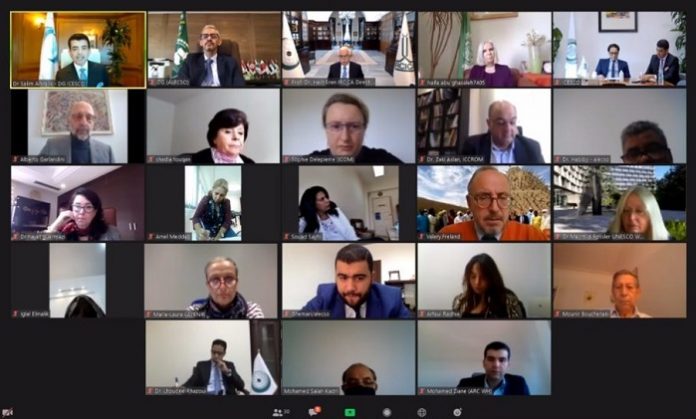 AlMalik also urged the international organization to set up consolidated fund to support damaged sites and monuments due to the COVID-19 pandemic and other crises. He demanded that the measure should be under the supervision of a scientific and coordination committee made up of the representatives from each organization.

This statement was part of the ICESCO chief’s address at the opening session of the Coordination Meeting that the Arab League of Educational, Cultural, and Scientific Organization (ALECSO) held on Tuesday through videoconferencing. The meeting aimed at developing an urgent action plan to save the damaged heritage due to pandemic and natural disasters. It brought together many museum officials and heritage experts.

AlMalik highlighted that the fragile infrastructure, weak human capital, and the lack of conservation of heritage sites often constitute a challenge to the sustainability of the right to have access to the human breakthroughs.

The Director-General explained that “such damage may lead to the disappearance of this 700-year-long civilization as well as more than 640 historic buildings in the old town of Beirut which were partially damaged due to the blast of Beirut port, including 60 buildings that face the risk of collapse within months unless restoration measures are taken.”

He also said the Organization has taken upon itself to support Member and non-Member States in prompt intervention efforts to preserve their heritage. Amid the current conditions, which threaten the global civilizational heritage, ICESCO established the Islamic World Heritage Fund with an initial budget of $250,000 to support the projects on heritage protection. It also allocated $100,000 as a contribution to the efforts of protecting and restoring damaged heritage sites due to floods in Sudan. ICESCO dedicated another USD100,000 to support the educational and cultural institutions in Lebanon.

The Organization also earmarked one million US dollars to restore the collections of 30 museums affected by the pandemic in Muslim countries.

AlMalik reiterated ICESCO’s willingness to promote cooperation and partnership with all organizations operating in the field of heritage while calling for an in-person expert coordination meeting as soon as possible, at ICESCO headquarters.

The goal is to explore the establishment of an international support network to identify violations against endangered heritage. The coordination meeting will also explore an international strategic plan based on accurate and scientific indicators.