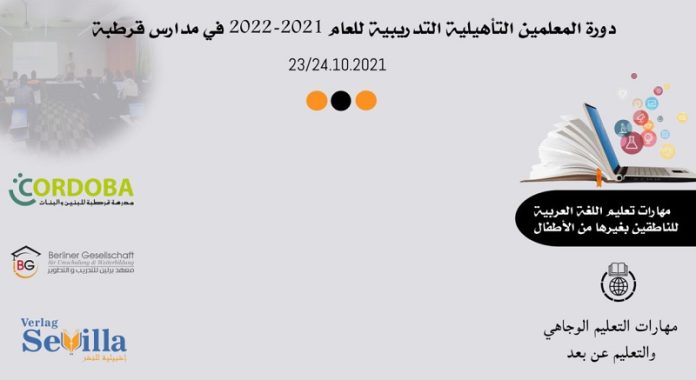 Rabat (UNA-OIC) – ICESCO Center of Arabic for Non-Arabic Speakers took part in the launch of the annual training session for Arabic language teachers to non-Arabic speakers organized by Cordoba School in Berlin, Germany, under the theme “Skills in Teaching Arabic to Non-Arabic Speaking Children Online and in a Classroom Setting.”

Expert at the Center Dr. Youssef Ismaili represented ICESCO in the opening session held on Saturday, October 23, via videoconference, during which he delivered the opening lecture entitled “Using Educational Linguistics in Arabic Language Teaching to Non-Native Speakers.”

The ICESCO expert noted the importance of contemporary linguistic theories in Arabic language teaching, emphasizing how to convert theoretical and conceptual linguistic knowledge into educational and procedural linguistic knowledge, and use it in teaching Arabic in a simplified, scientific manner to speakers of other languages, particularly in Europe.

He pointed out that the ICESCO Center of Arabic for Non-Arabic Speakers works intensively on providing expertise and technical advice to promote Arabic teaching and enhance the language’s status in the Organization’s Member States and non-member states speaking other languages.

Dr. Ismaili called on the teachers participating in the training session to take part in ICESCO’s educational initiatives to benefit from scientific developments in the field of teaching Arabic to non-Arabic speakers as part of the Organization’s endeavors to advance scientific and educational research, leverage expertise, exchange successful experiences, and strengthen relationships with researchers in the field of Arabic teaching to non-native speakers in Europe.