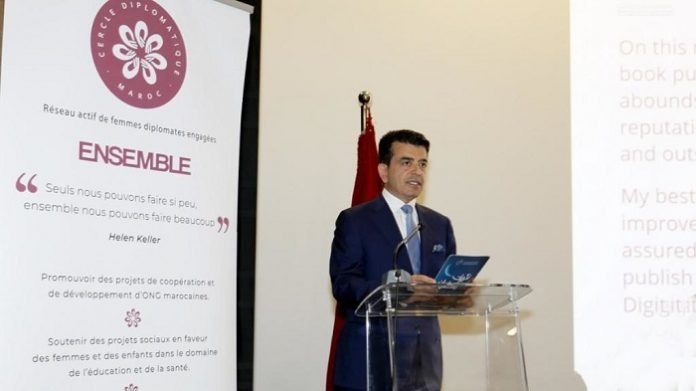 Rabat (UNA-OIC) – Director-General of the Islamic World Educational, Scientific and Cultural Organization (ICESCO) Dr. Salim M. AlMalik on Thursday participated in the launch ceremony of the book “Ramadan Tastes” that the charitable Diplomatic Circle in Morocco published with ICESCO’s support.

The book includes 56 recipes from 27 countries for delicious dishes that celebrate tolerance and generosity and value the cultural treasures of the Islamic world.

The ceremony that the charitable Diplomatic Circle organized at the headquarters of Mohammed VI Museum of Modern and Contemporary Art, in Rabat, saw the participation of Ms. Jamila Elmossalli, Minister of Solidarity, Social Development, Equality and Family of Morocco, along with several ambassadors and wives of ambassadors accredited to Morocco as well as the wives of several heads and directors of international organizations in the country.

In his address, Dr. AlMalik stressed that the publication of the book is a new and important approach. “All the publications that aim at highlighting the national heritage constitutes a valuable human and civilizational contribution on the level of customs and traditions as well as food and clothing, which are both elements of intangible heritage,” he added.

The Director-General also expressed the Organization’s willingness to support the dissemination of the book on a large scale through ICESCO Digital Home, noting that all the support that ICESCO provides in this context reaffirms its successful approach, particularly with the celebration of 2021 as the Year of Women.

For her part, Ms. Elmossalli commended the idea of ​​the book, noting that cooking is an inherited art. “Throughout history, women have excelled in the culinary arts. It is high time to take further steps to preserve this art through documentation to ensure its transmission to future generations,” she underscored. Ms. Elmossalli also expressed her gratitude to the Diplomatic Circle for publishing the book and to ICESCO DG for the efforts of the Organization in supporting women and enhancing their status.

Furthermore, Ms. Alessandra Mancini, wife of the Ambassador of Peru, Head of the Diplomatic Circle, delivered an address wherein she stated that the kitchen plays an important role as a catalyst for a sense of collective identity, which gives people a sense of belonging to a specific community and fosters a series of common cultural values.

Ms. Zeina Barakat Atallah, wife of the Ambassador of Lebanon, Treasurer of the Diplomatic Circle, said that the book is the fruit of six months of work during which 27 countries of the Islamic World contributed to highlighting and illustrating their cultural habits and culinary arts.

Ms. Yolanda Jah, wife of the President of the Islamic Culture Foundation, Secretary-General of the Diplomatic Circle, indicated that the book aims to bring the reader closer to the cultural richness of countries of the Islamic World through the cooking traditions and practices related to the month of Ramadan.

The charitable Diplomatic Circle is a non-profit association, established 30 years ago, to support social projects, whose members include the wives of accredited ambassadors and representatives of international organizations in Morocco. The sales proceeds of “Ramadan Tastes” will be allocated to support several humanitarian programs in Morocco.