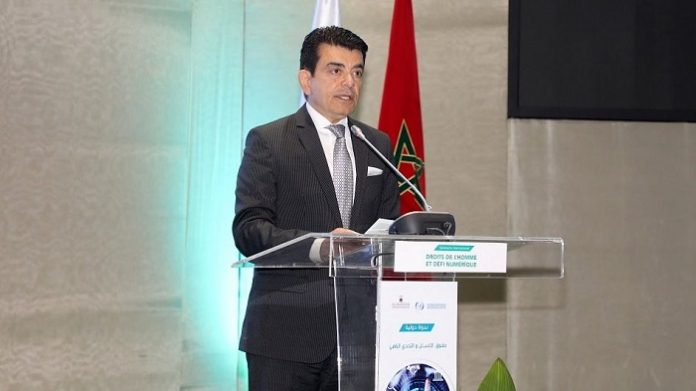 Rabat (UNA-OIC) – Director-General of the Islamic World Educational, Scientific, and Cultural Organization (ICESCO) Dr. Salim M. AlMalik reaffirmed that the future challenges, which the rapid developments in technology and artificial intelligence pose, impose upon us a set of common duties and responsibilities.

The list includes ensuring safe access by Islamic world societies to cyberspace, where the freedom of expression and belief, as well as academic, cultural, and educational freedoms, are respected and the dignity of the human self is preserved.

The Director-General’s statement came in his address at the opening session of the international symposium “Human Rights and the Digital Challenge” that ICESCO and the Ministry of State in charge of Human Rights and Relations with the Parliament in Morocco held on Tuesday, face-to-face at ICESCO headquarters and by videoconference.

He stated that ICESCO seeks to thwart the threats to individual rights in cyberspace by urging its Member States to develop their legislation and ratify international conventions related to the protection of personal data, the fight against all forms of discrimination and violence against women and children and immigrants, as well as those relevant to combatting violent extremism, prevention of money laundering and all forms of cybercrime.

AlMalik called for joint action to develop regional and international systems based on cooperation and complementarity between the judicial and legislative institutions and the civil society. He lauded the quantum leap that Member States and private legislation made in monitoring cyberspace and responding to all sorts of crimes.

The Director-General announced ICESCO’s establishment of the “Human Rights and Digital Transformation” Chair to promote the sincere efforts to absorb these changes in Member States. He reaffirmed that all the risks associated with modern technologies should not conceal their advantages in developing societies and ensuring human progress.

Concluding his statement, the ICESCO chief said, “Technology is an efficient tool in monitoring and anticipating potential violations to human rights. Our objective is to ensure a balance between technological development and the protection of rights and freedoms.”