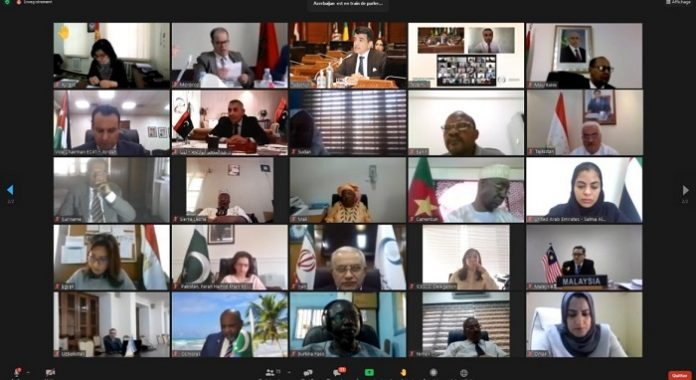 Rabat (UNA-OIC) – The 41st Session of the Executive Council of the Islamic World Educational, Scientific, and Cultural Organization (ICESCO) closed its proceedings on Wednesday, with the adoption of all the reports and projects that the General Directorate submitted while taking into account the observations and proposals that the Council members made during the meetings.

During the two-day meetings, the Council reviewed and examined several reports. ICESCO Director-General Dr. Salim M. AlMalik delivered a presentation on ICESCO’s Activity Report for 2019 and 2020, and ICESCO’s efforts during the COVID-19 pandemic to help its Member States in addressing the pandemic’s repercussions. The presentation was substantiated with statistics on the Organization’s achievements and the direct beneficiaries from its programs and projects and their geographical scope.

The Council members, Secretaries General of Member States’ National Commissions of Education, Science and Culture, lauded the assistance that ICESCO provided to their respective countries during the pandemic as well as the practical programs it implemented jointly with the competent parties in each Member State.

The Council then reviewed ICESCO’s financial reports for 2019 namely those related to Closing Accounts, the Audit Company, the Financial Control Committee (FCC), Member States’ Contribution to ICESCO’s Budget and the Organization’s Financial Situation for 2019. Following presentations, the Council adopted all the financial reports as well as the draft foresight vision of ICESCO and its enhanced working strategy for the next period that was updated in light of the global changes. The vision was drawn based on the new trends and anticipation of future risks.

The respective chiefs of ICESCO’s sectors: culture, communication, education, science and technology, and human and social sciences delivered presentations on the vision and strategic programs on each sector for the upcoming period. The council members commended those presentations and requested the General Directorate to send them to the National Commissions for examination and ensure further cooperation between the Organization and its Member States in translating these visions and strategies into initiatives and executive action plans to meet the needs and priorities of each Member State and put forward many suggestions to enrich ICESCO’s action.

The Council then examined the Draft ICESCO Chairs Regulations specific to the establishment of research chairs in universities, higher education, and cultural institutions. Through the regulations, ICESCO seeks to develop a regulatory framework to identify the action of these chairs, fix their objectives and ensure their success. The Council approved the project for which the General Directorate reaffirmed that it obtained some funding through partnerships. King Abdulaziz University (KAU) in Saudi Arabia provided $500,000 in support of the project.

The Council adopted the Report on the Implementation of ICESCO’s New Organizational Structure and the Relevant Development Proposals, namely the establishment of the Center of Islamic World Heritage and the Center of Civilizational Dialogue. The Council also reviewed many reports on the digitization and modernization of ICESCO’s working system and the Performance and Efficiency of ICESCO’s Regional Offices, Delegations and External Centers, and Proposals to Develop their Working Mechanisms, respectively.

While discussing the date and venue of the 42nd session of the Executive Council, Dr. Ghada Abdelbary, Secretary-General of the Egyptian National Commission for Education, Science, and Culture, officially invited the Council members to convene the 42nd session of the Council in Egypt, one day prior to holding ICESCO’s 14th General Conference in Egypt in December 2021.

At the close of the Council session, the members read the decisions taken during the session’s meetings, taking into consideration the observations and suggestions put forward, while calling on National Commissions to support ICESCO’s efforts to enable it to achieve its objectives.

The ICESCO Director-General expressed his thanks and appreciation to Morocco for the attention King Mohammed VI and the Moroccan Government attaches to the Organization.

ABOUT US
Media Monitors Network (MMN) is a non-profit, non-partial and non-political platform for those serious Media Contributors and Observers who crave to know and like to help to prevail the whole truth about current affairs, any disputed issue or any controversial issue by their voluntary contributions with logic, reason and rationality.
Contact us: [email protected].net
FOLLOW US
Copyright © 2000 - MMN International Inc. All rights reserved.
Reproduction in whole or in part without permission is prohibited.
All other brands, logos, and product names are registered
trademarks or service marks of their respective owners.
ResponsiveVoice-NonCommercial licensed under