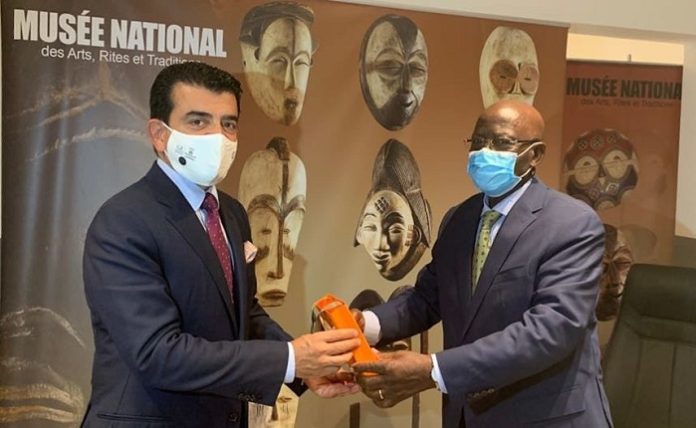 Libreville (UNA-OIC) – Director-General of the Islamic World Educational, Scientific and Cultural Organization (ICESCO) Dr. Salim M. AlMalik and Gabonese Minister of Culture and Arts Michel Menga M’Essone explored prospects for cooperation between ICESCO and Gabon in the field of culture and heritage.

The meeting held on Tuesday, October 5, 2021, at the National Museum in Gabon’s capital Libreville, is part of the official visit of ICESCO Director-General to Gabon to explore ways to promote cooperation between the Organization and the West African country in the next period.

AlMalik highlighted the major activities and programs that ICESCO carries out in the cultural field and addressed the Organization’s efforts to safeguard heritage in cooperation with the countries of the Islamic world.

For his part, the Gabonese minister hailed the roles ICESCO plays in the cultural sector and reaffirmed the Ministry’s keenness to build solid cooperation with the Organization. He described the Director-General’s visit as the first step towards strengthening these relations.

At the close of the meeting, the two parties agreed on a Ministry delegation’s visit to ICESCO’s headquarters in Rabat, Morocco, to meet with the officials and experts of the Sector of Culture and Communication, to explore the arrangements for implementing several initiatives and programs in Gabon. These include training Gabonese officials and professionals on preparing nomination files for heritage inscription, organizing workshops and symposia in Gabon under the supervision of ICESCO’s experts, virtually displaying the collections of the National Museum of Gabon on “ICESCO Digital Home”, and co-organizing specialized conferences and forums.

Ms. Ramata Almamy Mbaye, Director of the Sector of Social and Human Sciences, and Dr. Ahmad Said Bah, Advisor to ICESCO Director-General for Partnerships and International Cooperation, attended the meeting.

Following the meeting, the ICESCO chief toured the National Museum of Gabon and took note of its collections, artifacts and heritage halls, especially the natural heritage of the world-renowned medicinal plants.