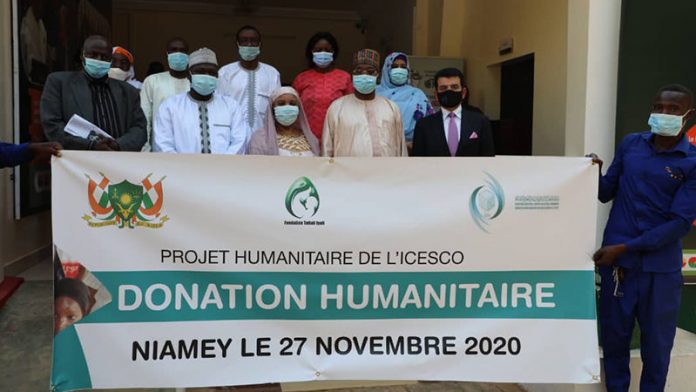 Rabat, (UNA-OIC) – As part of the “Comprehensive Humanitarian Coalition” and the “Societies We Want” initiatives, the Islamic World Educational, Scientific, and Cultural Organization (ICESCO) provided $100,000 in aid to Niger to support NGOs and several flood-hit local communities to rehabilitate the infrastructure.

During a special ceremony organized on Friday, November 27, 2020, in Niamey, Dr. Salim M. Al-Malik, ICESCO Director-General (DG), and Dr. Idi Illiassou Mainassara, Minister of Public Health of Niger, signed the agreement detailing the projects and programs that the grant will fund. The implementation will take place in cooperation with the Organization and the concerned authorities in Niger.

Mrs. Brigi Assalo, the wife of the Prime Minister of Niger, attended the signing on behalf of the First Lady of Niger, Dr. Lalla Issoufou Maleika, who sponsors several institutions and associations working in the humanitarian and social fields and the health sector in the country.

The agreement sustains ICESCO’s efforts to support its Member States in countering the negative effects of crises through a set of initiatives, projects, and programs that the Organization has launched and implemented since the beginning of the Covid-19 pandemic.