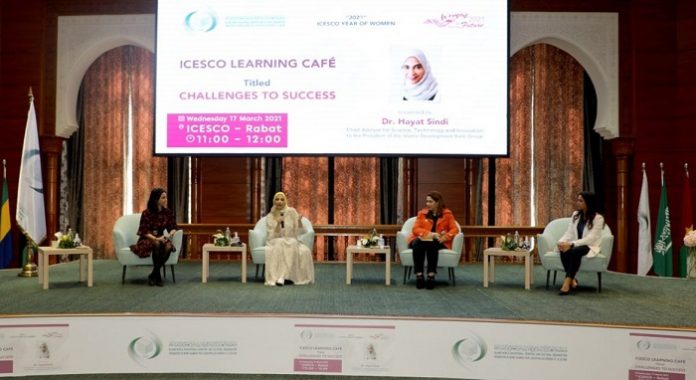 Rabat (UNA-OIC) – As part of the activities of the Islamic World Educational, Scientific, and Cultural Organization’s (ICESCO) 2021 Year of Women, under the high patronage of King Mohammed VI of Morocco, the ICESCO Learning Café hosted Dr. Hayat Sindi, Chief Scientific Advisor to the President of the Islamic Development Bank.

In the meeting entitled “Challenges and Successes”, Dr. Sindi talked about the beginnings of her passion for science and scientists, who contributed to change, and the impact of inspiration in her life.

During the meeting, held yesterday, March 17, 2021, at ICESCO Headquarters in Rabat, Dr. Sindi told the participants about her childhood dreams of success and the contribution of her father, who strengthened her passion for science, while stressing that the main motivation behind the passion is considering science as the first and basic means for satisfying all the human needs.

Sindi stated that there are vulnerable and poor groups that are deprived of access to technology. The situation encouraged her to look for the means likely to provide technology for all without exception because science and technology derive their power from being accessible for all.

She added “men monopolize the fields of science and women are looking for their position there too. The perceptions that women and men have on science are different from one another. For instance, men consider Artificial Intelligence more appropriate for wars while women find it useful for health and social care, which is a source of invention and innovation.”

Speaking of inspiration, Dr. Sindi reaffirmed that it is a particularly important element in our life, without which no goal can be achieved, stating that she drew inspiration from her family and school. She was about to give up, especially in her beginnings, but she drew strength and perseverance from considering every day of her life as a new challenge.

The participants asked questions and expressed their ideas, with which Dr. Sindi interacted based on her rich career and experience in the fields of science and innovation.