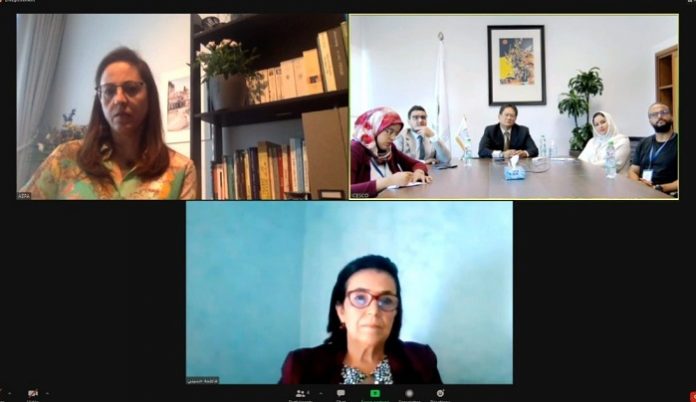 Rabat (UNA-OIC) – The Islamic World Educational, Scientific, and Cultural Organization (ICESCO) and the European Association for Teaching Arabic to Non-Arabic Speakers in Brussels held on Wednesday a virtual coordination meeting to explore organizing an international conference at the headquarters of the European Parliament (EP) next December, in celebration of World Arabic Language Day.

Head of ICESCO Center for the Arabic Language for Non-Arabic Speakers Dr. Majdi Haji Ibrahim, Expert at the Center Dr. Youssef Ismaili and Program Assistant at the Center Rajae Al Hakkouni represented ICESCO during the meeting. Whilst, the European Association for Teaching Arabic to Non-Arabic Speakers was represented by President of the Association Samira ben Abdelouahab and President of the Association’s Scientific Committee Dr. Fatima Houssni.

The two parties discussed the importance of involving international organizations and major global institutions in celebrating World Arabic Language Day. They also touched on the details of the conference, due to be held in cooperation between ICESCO and the Association.

Both parties further discussed the conference title, themes, and date, along with the list of proposed participants. They agreed on holding a parallel training workshop for Arabic language teachers.

At the close of the meeting, the two parties agreed on a set of recommendations to develop a roadmap for joint action arrangements and assign tasks to prepare for the conference.