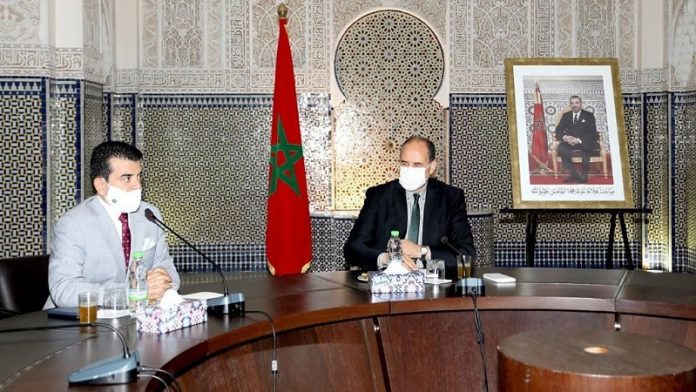 The meeting explored ways to strengthen the partnership between ICESCO and the League by holding the second edition of the International Conference on the Prophet’s Seerah in 2022, and publishing the second volume of the Encyclopedia on Deconstructing the Discourse of Extremism.

During the meeting, AlMalik commended the successful strategic partnership between ICESCO and the League, which resulted in several achievements in 2021, particularly the International Conference on the Civilizational Values ​​in the Prophet’s Seerah, held under the high patronage of Moroccan King Mohammed VI. The event also saw the publication of the first volume of the Encyclopedia on Deconstructing the Discourse of Extremism.

On his part, Abbadi stressed that the strategic partnership between the League and ICESCO is guided by King Mohammed VI’s royal directives included in his royal message addressed to ICESCO’s Islamic Conference of Ministers in Charge of Childhood, held in 2018 under the theme “Towards a Safe Childhood”.

He added that the king underlined that “the Kingdom of Morocco reaffirms its firm commitment to joint Islamic action, particularly in crucial issues such as the common future of our Ummah. Against this background, Morocco is willing to make share its accumulated experience with all its fraternal countries.”

The meeting also brought together Dr. Abdelilah Benarafa, ICESCO Deputy DG; Ambassador Khaled Fathalrahman, Director of the Civilizational Dialogue Center; and Dr. Ahmed Said Bah, Adviser to ICESCO DG for Partnerships and International Cooperation; as well as Dr. Abdessamad Ghazi, Director of the Center for Monitoring and Foresight Studies; Dr. Mohammed Al-Mantar, Head of the Center for Quranic Studies; in addition to several officials from the League.