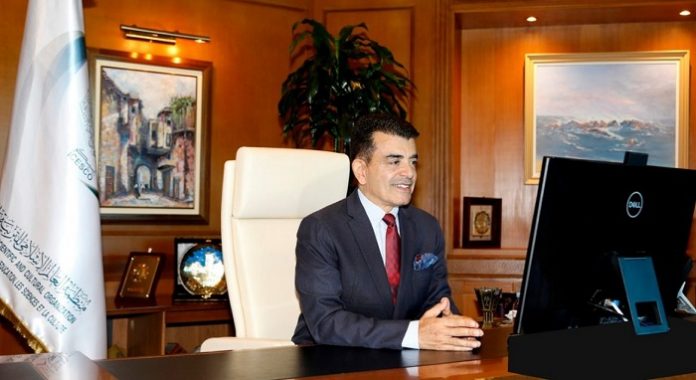 AlMalik also stressed that ICESCO refuses the phrases “Islamophobia” and “Islamist terrorism,” which is deliberately meant to poison international relations, incite hatred in addressing terrorism, and mislead the international opinion. He also highlighted that Islam is the religion of tolerance, which is far from the terrorist crimes, political agendas, electoral motives, and media campaigns.

The statement was part of the ICESCO chief’s address at the International Virtual Conference on “Hatred Speech as a Source of Terrorism”, held on Tuesday by the Caucasian Muslims Office. The event brought together the representatives of many international specialized organizations, Muslim leaderships, public figures, and politicians from Russia, North Caucasus, Middle Asia, Europe, the Middle East, and Africa.

AlMalik added that as part of its new vision, ICESCO launched short videos entitled “Nafahat Ramadanya” and “Afaq Fikrya wa Thaqafia” during which influential, religious, and intellectual figures to raise awareness of the issues related to terrorism and hate speech.

The Rabat-based ICESCO also held an international virtual forum on the role of religious leadership in face of crises, which issued a historic document “ICESCO Declaration for Moral Solidarity”. The document was submitted to the world’s decision-makers at the G20 and the United Nations.

“ICESCO, in collaboration with its partners, launched a new action program for the benefit of university and research institutions as well as all researchers, students, and young people to ensure intellectual immunity from the extremist discourse,” underlined the Director-General.

AlMalik also called for the implementation of the legitimate international resolutions relevant to the disputed Azerbaijani Nagorno-Karabakh region, and the protection of heritage sites and historic monuments. He also called for compliance with the principles of international law, respect for the cultural and historical rights, and the provision of the necessary guarantees for the return of displaced people while stating that ICESCO has kept up with and supported the initiative of “Baku Process” for the promotion of intercultural dialogue which contributed to peace between world peoples and rapprochement between cultures and religions.

The ICESCO chief thanked and congratulated Azerbaijani President Ilham Aliyev on the liberation of Azerbaijan’s region of Nagorno-Karabakh while welcoming the signed cease-fire deal.