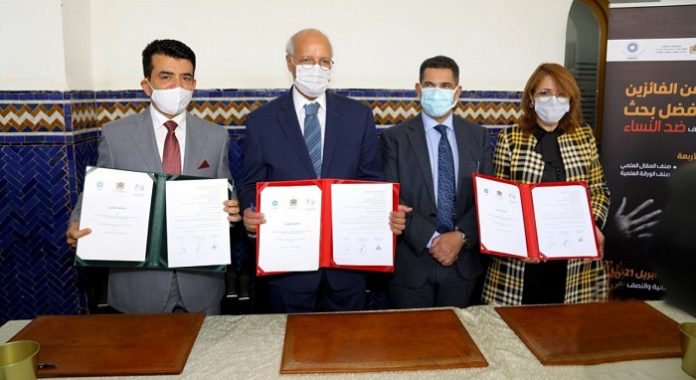 The agreement concerns the Award of the “Best Scientific Research on Combating Violence against Women”, which includes five categories, to be granted to the best scientific research works aimed at producing new knowledge or solutions for this phenomenon.

The agreement was signed on Monday at the headquarters of the Higher Education and Scientific Research Sector, in Rabat, in the presence of Dr. Saaid Amzazi, Minister of National Education, Vocational Training, Higher Education and Scientific Research, Chairman of the Moroccan National Committee for Education, Science and Culture; ICESCO Director-General Dr. Salim M. AlMalik; Minister Delegate to the Minister of National Education Dr. Driss Ouaouicha; and CNRST Director of Dr. Jamila El Alami.

“The Award is part of the Kingdom of Morocco’s initiative to combat violence against women, launched on 08 March 2020, under the supervision of Her Royal Highness Princess Lalla Meryem. This initiative reflects the great partnership between the Ministry and ICESCO, and the Organization’s proclamation of 2021 as the Year for Women” he underscored.

On his part, Dr. Ouaouicha highlighted the spread of violence against women in our societies, particularly during the lockdown period. “Such situation stresses the importance of this Award which is likely to contribute to combating this phenomenon and finding scientific solutions to it,” he added.

In his address, Dr. AlMalik indicated that the teachings of Islam call for honoring women and combating violence against them, noting that ICESCO is making every effort to grant women their rights.

“ICESCO’s proclamation of 2021 as the year of women, under the high patronage of His Majesty King Mohammed VI, is part of these efforts,” he highlighted.

The Director-General also stated that “this partnership will herald other partnership agreements with universities and research institutions and encourage the establishment of several ICESCO academic chairs. This Award will be the start of similar prizes in other countries of the Islamic World.”

On her part, Dr. Jamila El Alami said that this Award is the first of its kind at the national level while highlighting its salient stages starting from nominations until the announcement of winners. The participants also took part in the 2021 award ceremony.

According to the agreement, the winners will receive the Award on the 8th of March of every year, corresponding to the celebration of International Women’s Day. The nominated scientific research works should be:

The scientific research works can be written in Arabic, French, or English. The prize money of the Award is as follows:

Based on the recommendations of experts, the Award can be granted to more than one winner in each category.