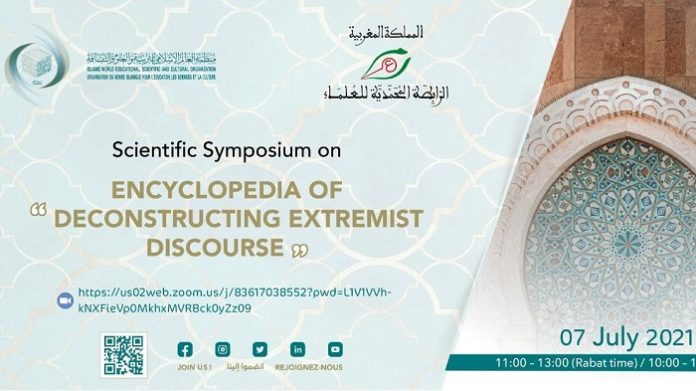 Rabat (UNA-OIC) – The Islamic World Educational, Scientific, and Cultural Organization (ICESCO), in partnership with the Mohammadia League of Scholars, will hold a scientific symposium to introduce the first part of the “Encyclopedia on Deconstructing Extremist Discourse”.

The encyclopedia was prepared under the framework of the partnership agreement signed between the ICESCO and the League to protect Muslim youth against various forms of extremist discourse within and outside the Islamic world.

The symposium, due to be held on Wednesday, 7 July 2021, both at ICESCO headquarters, in Rabat, and through videoconferencing, will start at 10:00 UTC (11.00 Rabat time) with the recitation of verses from the Holy Quran, followed by a welcoming address of ICESCO Director-General Dr. Salim M. AlMalik.

Afterward, ICESCO Deputy Director-General Dr. Abdelilah Benarafa will give a general overview of the symposium, while Secretary-General of Mohammadia League of Scholars Dr. Ahmed Abaddi will deliver the main lecture, which will include a definition of the encyclopedia as well as its characteristics and distinctive components.

The encyclopedia, the first part of which was completed, is the first scientific initiative that aims to monitor and deconstruct the various forms of zealotry and extremism in Muslim countries and highlight the aspects of misinterpretation and misuse of many religious concepts to sow division and spread a distorted image about the teachings of Islam across the world.

The first part of the encyclopedia lays out the theoretical framework for dismantling the intellectual backgrounds of extremist discourses through several academic research works under the four following themes: