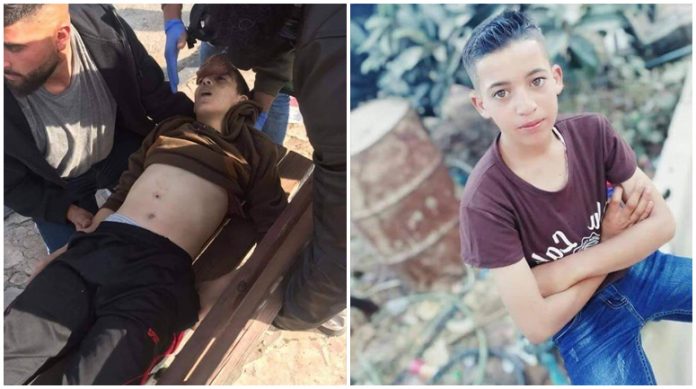 Jerusalem, (UNA-OIC) – In just two weeks between November 24 and December 7, Israelis shot and killed two Palestinians, one of them a 13-year-old boy, injured 206 people, including ten children, detained 149 Palestinians in 182 search-and arrest operations, demolished or seized 52 Palestinian-owned structures displacing 67 people and affecting 860 others, and vandalized or uprooted 500 trees, according to a report by the United Nations Office for the Coordination of Humanitarian Affairs (OCHA) in the occupied Palestinian territory.

It said in its biweekly Protection of Civilians report that on December 4, Israeli soldiers shot and killed a boy in al-Mughayyer village near Ramallah, and on November 25, a man at a checkpoint near Jerusalem. Both were killed without reason and in cold blood, as charged by the Palestinians and evidence later proved.

The UN Special Coordinator, Nickolay Mladenov, as well as the UN Human Rights Office, have called on Israel to conduct prompt, transparent, and independent investigations into these incidents and hold those responsible accountable.

Overall, said OCHA, 206 Palestinians, including ten children, were injured in multiple clashes across the West Bank. Nine of all the Palestinians injured were hit by live ammunition, some of them were in critical condition, and 78 by rubber bullets, 110 were treated for tear gas inhalation, and most of the rest were physically assaulted.

Israeli occupation forces carried out 182 search-and-arrest operations and arrested 149 Palestinians across the West Bank between November 24 and December 7, said OCHA. The largest number of operations was recorded in the governorates of Jerusalem (52) and Hebron (46). Forty of the Jerusalem operations happened in East Jerusalem, including nine in the Isawiyya neighborhood.

A total of 52 Palestinian-owned structures were demolished or seized due to a lack of Israeli-issued building permits, displacing 67 people and otherwise affecting about 860, said OCHA.

Of the targeted structures, 49 were in Area C of the occupied West Bank, and three in East Jerusalem. On November 25, Israeli authorities demolished ten structures, including about four kilometers of water pipes provided as humanitarian assistance, in seven communities in the Masafer Yatta area of southern Hebron; most of this area is designated closed for military training, placing its 1,400 residents at risk of a forcible transfer.

The demolition of 13 structures during this period was carried out on the basis of Military Order 1797, which allows for demolitions within 96 hours of the issuance of a ‘removal order.’ Two of the three residential structures demolished in East Jerusalem were carried out by the owners to avoid additional fines and charges.

At least 300 Palestinian-owned trees and other properties were damaged by Israeli settlers. The vandalized trees include 150 grape vines and about 140 olive trees and saplings in the villages of Turmus Ayya near Ramallah, al-Sawiya near Nablus, and Kafr ad Dik, Bruqin, Yasuf, and Haris in the Salfit district.

At least 1,750 olive trees were vandalized, and the produce of over 1,800 was stolen by settlers in October and November, said OCHA.

Two of the remaining incidents involved damaging of a plant nursery in al-Sawiya village and a shop in the Israeli-controlled area of Hebron city, and another involved an attack on shepherds in Tubas and the injury of a cow.

Israeli occupation forces uprooted some 200 olive trees and grapevines planted by farmers from al-Khader village near Bethlehem, on grounds that the land was declared ‘state land.’ The land, situated next to the illegal Neve Daniel settlement, was declared ’state land’ in 2014.