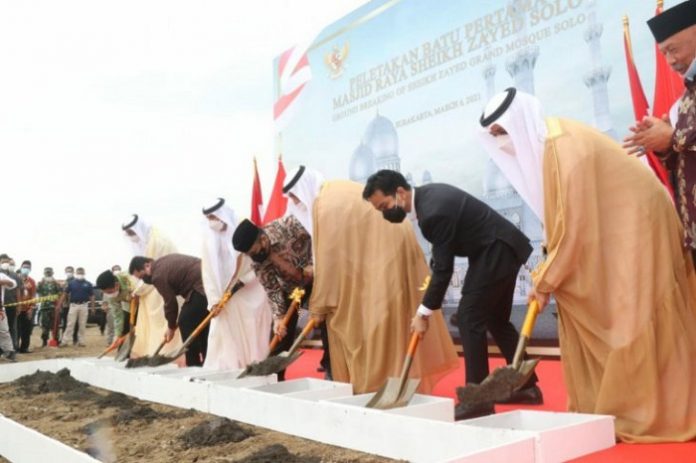 Solo, C Java (UNA-OIC) – The Indonesian government has started construction of Sheikh Zayed Gand Mosque in Solo, Central Java, which is being built as a symbol of Indonesia-United Arab Emirates friendship.

“This mosque that has a contemporary history will be dedicated to all Muslims and will be managed by the Indonesian government. Insya Allah (God willing), this mosque will bring great advantage to the public,” Indonesian Religious Affairs Minister Yaqut Cholil Qoumas said while laying the cornerstone for the mosque here on Saturday.

He highlighted the mosque, which is being built using a grant from UAE Crown Prince Sheikh Mohammed bin Zayed An Bahan to Indonesian President Joko Widodo, will serve as a symbol of Indonesia-UAE friendship.

Meanwhile, UAE’s Minister of Energy and Industry Suhail Mohammed Al Mazroui said the UAE government is trying to make the architecture of the mosque resemble that of the mosque in Abu Dhabi.

“As we all know; the mosque is the symbol of the very special architecture. It will serve not only as a place of worship, but also a tourist destination. The mosque built here would not only reflect the superiority of building architecture, but could also become a source of foreign exchange earnings,” he said.