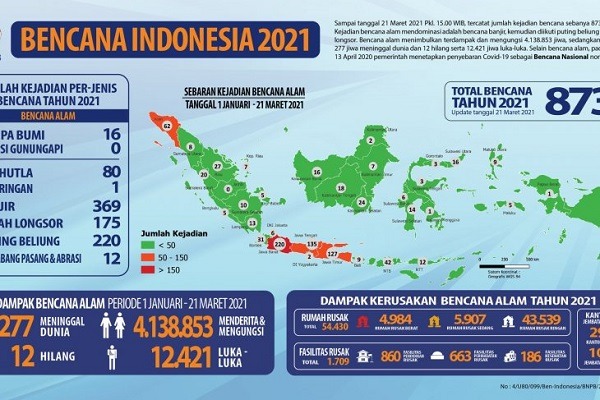 Jakarta (UNA-OIC) – Indonesia experienced 873 natural disasters during the period from January 1 to March 21, 2021, according to the National Disaster Management Agency (BNPB).

Natural disasters to have struck the country were largely floods followed by whirlwinds and landslides, the agency noted in a statement on Sunday.

Some 54,430 houses were damaged, including 4,984 houses that incurred serious damage, 5,907 houses that suffered moderate damage, and 43,539 houses that were slightly damaged.

Head of BNPB Doni Monardo had earlier pressed for intensifying disaster literacy in order to boost disaster risk preparedness. “Disaster literacy must be conducted since elementary school, because the earlier one gains information on disaster management, the better it is,” he affirmed.

Monardo expressed belief that imparting literacy from an early age can provide knowledge to the community on the importance of disaster mitigation. “Information will continue to be disseminated at any time to remind the public, as disasters can occur at any time,” he remarked.