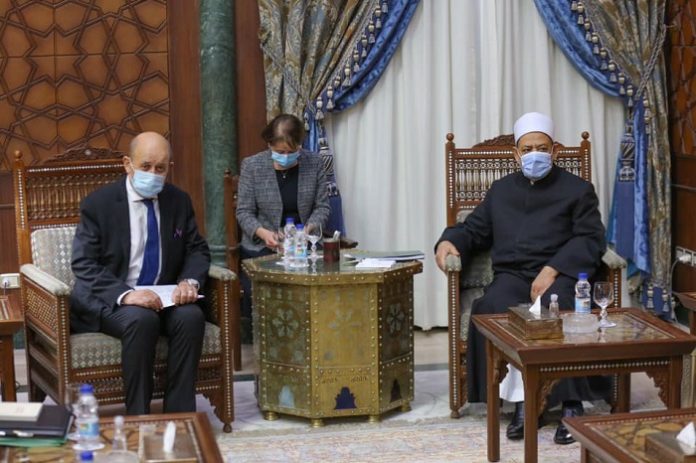 “Insulting Prophet Muhammed, peace be upon him, is unacceptable and we shall pursue whoever does that in court, even if we spend the rest of our lives doing so,” Sheikh el-Tayeb said in reference to the offensive caricatures of Islam’s Prophet published by a French magazine last month.

“We reject the term ‘Islamic terrorism’ as well as any other useless terms that serve no purpose. This term must not be used as it offends Muslims around the world and is simply contradictory to the truth,” said the grand imam. “When speaking of Islam and its holy Prophet (PBUH), I refuse to be diplomatic.”

Muslims around the world reject all forms of terrorism committed in the name of religion and affirm that Islam and its Prophet have nothing to do with terrorism, he added.

“Al-Azhar represents nearly two billion Muslims from around the world and I previously affirmed on the international stage that terrorists do not represent us and that we are not responsible for their actions,” Sheikh el-Tayeb asserted, expressing hope that European officials were aware that such incidents do not represent Islam and Muslims, especially when Muslims are often the biggest victims of terrorism.

“I am the first to protest freedom of expression if it offends any religion and not only Islam,” said the grand imam of Al-Azhar, Egypt’s renowned Islamic institution.

“Transgressions are committed by all followers of religions. Since we never blamed Christianity for the terrorist attack in New Zealand, then we must also not blame Islam for terrorism committed in its name. I do not accept that Islam is blamed for terrorism,” Sheikh el-Tayeb told the French delegation.

“Throughout history, Al-Azhar has opposed terrorism and we created a set of curricula that have made clear that terrorists are criminals and that they have nothing to do with Islam,” he concluded.