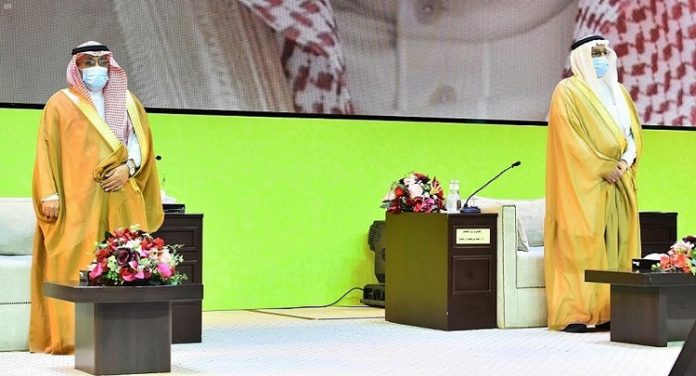 Riyadh (UNA-OIC) – The International Conference on “Saudi Arabia’s Efforts in Serving Islam, Muslims and Consolidating Values of Moderation” kicked off on Wednesday at Imam Mohammad bin Saud Islamic University IMSIU.
The event was launched in the presence of Minister of Education Dr. Hamad bin Mohammed Al Al-Sheikh; Deputy Minister of Education for University Affairs Dr. Mohammed Al-Sudairy; and IMSIU President Dr. Ahmed bin Salem Al-Amri.
The IMSIU president delivered a speech, in which he praised efforts being exerted by Saudi Arabia to serve Islam and Muslims around the world. He pointed out that the Kingdom’s service to Islam and Muslims has extended throughout history from its establishment by the late founder King Abdulaziz Al Saud until the era of Custodian of the Two Holy Mosques King Salman bin Abdulaziz.
Dr. Al-Amri expressed the university’s pride in holding this international conference that sheds light on the efforts of Saudi Arabia in serving Islam and Muslims as well as consolidating the values of moderation, through the participation of a group of researchers from different countries of the world.
https://www.spa.gov.sa/viewfullstory.php?lang=en&newsid=2196650#2196650