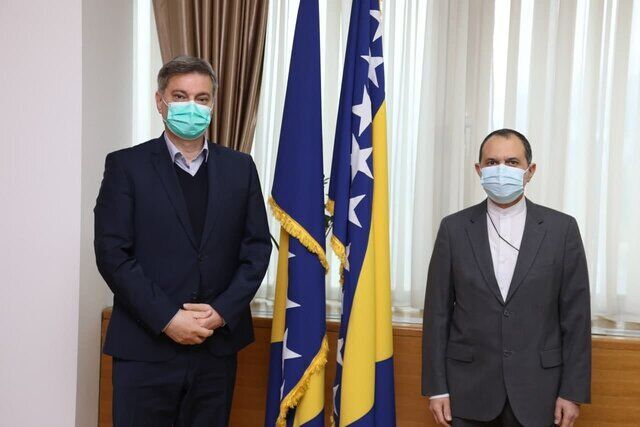 Qelichkhan expressed hope in the meetings that the parliaments of Iran and Bosnia-Herzegovina will help expand relations between the two countries in all fields.

He said that since the independence of Bosnia-Herzegovina, Iran has respected its territorial integrity, sovereignty, and unity, as well as the ethnicities living in the country.

Congratulating the successful local elections in Bosnia-Herzegovina, Qelichkhan said that Iran respects all ethnic groups of the country, including Bosniaks, Serbs, and Croats as the top agenda of diplomatic relations with Bosnia-Herzegovina.

Thanking Iran for its helps to Bosnia and Herzegovina in the 1990s, Zvizdić welcomed expansion of ties between Tehran and Sarajevo in recent years, adding that when the coronavirus epidemic is over, exchange of delegations at highest levels, holding joint economic commissions, and meetings of investors should go on.

Referring to various capacities of the two countries, Qelichkhan called for implementation of small economic plans, adding that they are effective ways for expansion of cooperation.

Čović hoped that exchange of parliamentary delegations would resume after the coronavirus epidemic goes away, adding that relations between Iran and Bosnia are based on mutual respect and good faith.