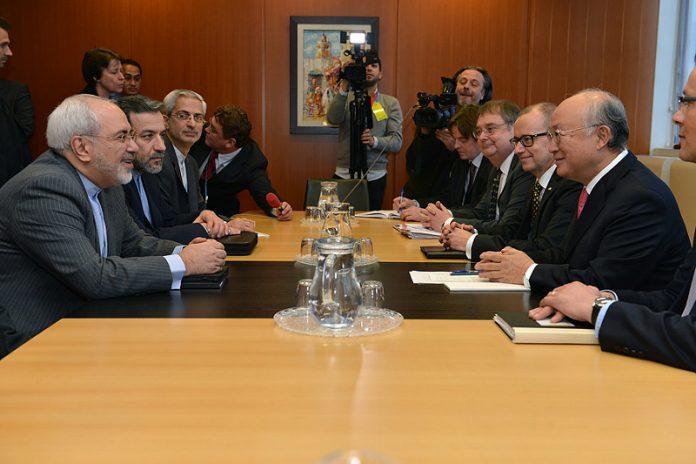 It is generally agreed that a bird in the hand is worth two (or three, or more) in the bush. President Trump, however, does not see it that way.

It has been a busy week in Washington as first French President Emmanuel Macron and then German Chancellor Angela Merkel dropped in to try to persuade Trump not to pull out of the 2015 deal that prevented Iran from developing nuclear weapons for the next ten years. They failed.

As Macron said: “My view is that [Trump] will get rid of this deal on his own, for domestic reasons.” The response of America’s three most important allies has been to break decisively with the United States on the issue: on Sunday Macron and Merkel joined with British Prime Minister Theresa May in declaring that the Iran nuclear deal is “the best way of neutralising the threat of a nuclear-armed Iran.”

This is the most dramatic split in the Western alliance since Germany and France refused to go along with the foolish and illegal invasion of Iraq in 2003 (but Britain went along with it to preserve its imaginary influence in Washington). Indeed, the only American allies that have been urging Trump to pull the plug on the nuclear deal are Israel and the conservative Arab states, which hope to draw the US into a war with Iran.

They are the exceptions because they are the only countries that actually feel threatened by Iranian nuclear weapons. Well, maybe Pakistan too, since that country’s six nuclear explosions in 1998 were the catalyst that set Iran’s nuclear weapons programme in motion. On the other hand, Israel already has hundreds of nuclear weapons and shouldn’t worry so much. Deterrence works.

A nuclear-armed Iran would certainly pose no threat to any of the six countries that signed the Joint Comprehensive Plan of Action (JCPOA), the 2015 deal that put Iran’s nuclear weapons programme on hold. The US, Britain, France, Germany, Russia and China all have far more nuclear weapons than Iran would ever possess (or, in Germany’s case, belongs to an alliance that does). Deterrence still works.

So why did they all bother? Probably because they prefer an Israeli monopoly on nuclear weapons in the Middle East. They don’t all love Israel, but if more countries in the region had nukes, the Middle East’s endless wars might one day lead to a local nuclear exchange. Maybe that could be contained in the region, but maybe not; some of the major regional powers have outside allies.

So there was general support on the United Nations Security Council for stopping Iran from getting nuclear weapons, and UN economic sanctions were placed on Iran from 2006 onwards. US sanctions were far older, but the deal that was signed in 2015 ended all UN sanctions and the most severe US sanctions, which targeted Iranian banks and oil exports.

Unfortunately for Iran, the country remained largely excluded from the world banking system because banks feared the re-imposition of the sanctions, and so much of the economic relief Iran expected from the end of sanctions never arrived. There is therefore growing hostility in Iran to the JCPOA deal, but why is it even stronger in the White House?

Trump talks about Iran “cheating” on the deal. (International Atomic Energy Agency inspectors have certified eleven times since 2016 that Iran is meeting its obligations.)

He calls the deal “insane” and the “worst ever”, complaining that it imposed only a ten-year ban on Iran’s suspect nuclear activities, did not stop the country from testing ballistic missiles, and did not stop Iran from interfering in other countries. “They should have made a deal that covered Yemen, that covered Syria, that covered other parts of the Middle East,” he said.

These are birds in the bush, and they were never within reach. It took two years of negotiation just to get a deal for 10 years of restrictions on the Iranian nuclear programme in return for an end to UN economic sanctions. There was no way that Iran was going to place its foreign, military and energy policies under UN supervision forever. The deal accepted by Obama in 2015 was realistic; Trump’s preferred substitute is pure fantasy.

What really drives Trump’s hatred of the deal, in all likelihood, is simply the fact that it was one of Obama’s major successes – what Macron referred to as “domestic reasons”. It fits a pattern: Trump’s cancellation of the trans-Pacific trade deal, the US withdrawal from the climate pact, the largely unsuccessful assault on health care (‘Obamacare’), and now the attack on the Iran nuclear deal.

So Trump will repudiate the Iran deal on 12 May, or maybe a little later. It will probably then die (although the other five countries will try to keep it going), because Iranians’ pride will not let them stay in a deal whose benefits, in terms of access to world trade, have evaporated. And in Pyongyang, Kim Jong-un will draw his conclusions about the reliability of the United States as a negotiating partner.