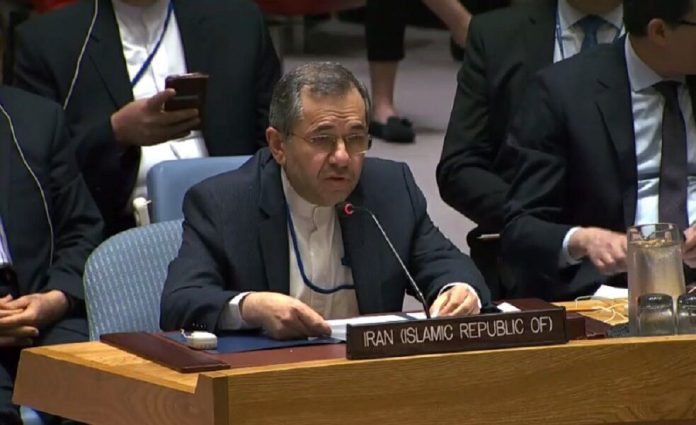 Addressing a meeting of the Security Council on Palestine, he condemned the occupation of Palestine as the main cause of the Middle East crisis and said that the Israeli regime, by implementing its plan to annex significant parts of the occupied Palestinian territory, will open a new chapter in its continued oppressions and crimes.

Full text of the statement reads as follows:

“In the Name of God, the Most Compassionate, the Most Merciful

While the occupation of Palestine is the main cause of the Middle East crisis, the Israeli regime, by implementing its plan to annex significant parts of the occupied Palestinian territory, will open a new chapter in its continued oppressions and crimes.

Such an expansionist policy will further deteriorate and complicate the already tense situation in the Middle East and will have far-reaching consequences on regional and international peace and security.

Such an oppressive plan is, in the first place, the result of continued all-out unreserved support of the expansionist policies and unlawful practices of the Israeli regime by the United States over the past seven decades.

Moreover, the United States, by abusing its status as the permanent member of the Security Council, has completely and systematically shielded the Israeli regime and, in practice, rendered the Council ineffective in countering the crimes of that regime.

This has emboldened Israel to commit more crimes with total impunity and more brutality, the living examples of which are the continued construction and expansion of settlements, the sustained inhumane blockade of the Gaza Strip and systematic violation of the sovereignty of Syria and Lebanon in full contradiction with the UN Charter and international law.

Therefore, the US’ unequivocal support for the unlawful acts of the Israeli regime and the inaction of the Security Council in preventing such crimes have led to decades of crimes, aggression, death and destruction in Palestine, systematic invasion of other regional countries, and endangering regional stability and security.

They have also led to persistent erosion of trust and confidence in the Security Council and the United Nations in general.

At this juncture of international relations which is marked by an alarming trend of regression from a rules-based multilateralism into an unbridled power-based unilateralism, the United Nations and its Member States have an explicit legal obligation and a heavy moral and ethical responsibility to do whatever in their power to immediately reject the planned annexation of parts of the occupied Palestinian territory and to hold the Israeli regime accountable for all crimes it has committed during the past 72 years.

This should not be confined to mere verbal rejection and condemnation. All States, in fulfillment of their legal obligations under international law, must avoid granting any recognition to such annexation.

The Israeli regime must also be compelled to end the occupation of all the Palestinian territories as well as the occupied Syrian Golan and parts of Lebanon, to terminate over a decade-long cruel blockade against Gaza, and put an end to all its destabilizing activities in the region.

As we are approaching the 75th anniversary of the signing of the United Nations Charter, the international community must demonstrate its determination to uphold the noble values, ideals and purposes contained therein.

While the United Nations has catalyzed the decolonialization of many nations, it must fulfill its responsibilities in realizing the inherent right of the Palestinians to self-determination and the establishment of an independent Palestinian State in entire Palestine with Al-Quds Al-Sharif as its capital.

In this context, the Security Council must live up to its responsibilities to prevent the crimes and threats of the Israeli regime and support in practice the full realization of all inalienable rights of the Palestinian people.

I thank you, Mr. President.”