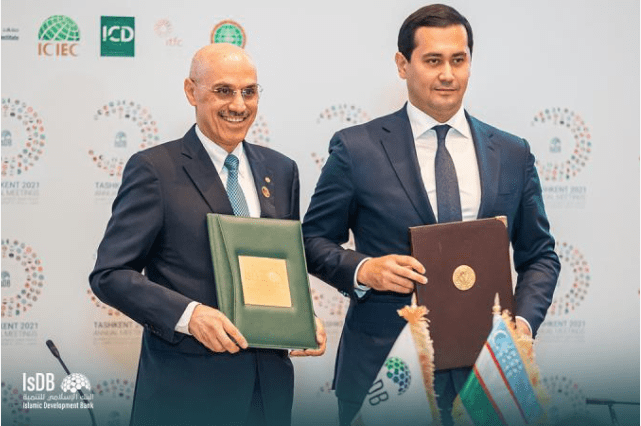 Tashkent (UNA-OIC) – The Islamic Development Bank (IsDB) Group, the AAA-rated multilateral development bank of the Muslim world, has announced US$ 1.2 billion in funding commitments as part of its effort to support the post-pandemic economic recovery among its member countries.

The funding commitments, which comprise around 30 MOUs and agreements signed between IsDB Group entities and counterpart institutions in member countries in Africa and Asia, were signed during the Group’s 2021 Annual Meetings, held in Tashkent, Uzbekistan.

Deeping cooperation with the meeting host country, IsDB announced the launch of the Economic Empowerment Fund for Uzbekistan, established in cooperation with the Uzbek government and private sector investors from the Kingdom of Saudi Arabia.  The US$ 100 million fund, of which US$ 20 million has been committed by IsDB, aims to create 100,000 jobs by supporting micro, small, and medium-sized enterprises (MSMEs). It is the first impact investment fund established in Uzbekistan.

In a special address during the annual meetings, which coincided with the 30th anniversary of Uzbekistan’s independence, President Shavkat Mirziyoyev hailed the launch of the new fund as a vote of confidence in Uzbekistan’s development and the continued implementation of economic reforms. In 2019, President Mirziyoyev issued an executive order creating the framework for expanded cooperation between Uzbekistan and IsDB.

Other commitments to Uzbekistan included a major US$ 200 million investment to support economic development in rural regions in the country. IsDB also signed an agreement to finance the second phase of a project devoted to expanding access to oncology services in Uzbekistan by equipping treatment centers and expanding medical training.

Sardor Umurzakov, Deputy Prime Minister and Minister of Investments and Foreign Trade of the Republic of Uzbekistan, who presided over the annual meetings as Chairman of the Board of Governors, hailed IsDB Group’s bold mobilization of financial resources.

“Uzbekistan is proud to have hosted such a productive edition of the annual meetings. This year, it was crucial that the bank continued to use its financial resources to address the economic needs of member countries. The clear message of these funding commitments is that member countries are stronger and more resilient when they act in unison,” Umurzakov noted.

Global supply chain disruptions caused by the COVID-19 pandemic have posed a challenge for developing countries. Prices for key commodities, including basic foodstuffs, have risen dramatically, putting the economic recovery of import-dependent countries at risk.

The Islamic Trade Finance Corporation (ITFC) will provide trade financing to several countries to support the import of strategic commodities, including energy products and foodstuffs. The Union of Comoros will receive EUR 330 million (US$ 392 million) over the next 3 years to support food and energy security.

Burkina Faso will receive EUR 85 million (US$ 100 million) to support the purchase of refined petroleum products for the country’s energy sector. ITFC also signed similar agreements with Guinea and Maldives, committing US$ 100 million and US$ 75 million respectively, to support the import of fuel and food commodities.

IsDB signed several agreements focusing on economic development. The Bank will also fund two major projects in Benin, with a combined value of US$ 150 million. The first project will support community health and nutrition in support of Benin’s goal of providing universal health coverage by 2025. The second project will support upgrades to the storm draining system of the capital city of Cotonou, in order to reduce the risks of flooding.

“The COVID-19 pandemic taught us difficult lessons about the fragility of national economies in a globalized world,” said IsDB Group Chairman H.E. Dr. Muhammad Al Jasser. “We are using the opportunity of our annual meetings to ensure that the power of multilateralism can help create stronger, more resilient economies in long term.”

The Islamic Development Bank counts 57 member countries, comprising one-fifth of the world population. In 2020, the bank approved US$ 6.8 billion in funding commitments. The banks’ response to the COVID-19 pandemic included a US$ 4.56 billion Strategic Preparedness and Response Program (SPRP), which is estimated to have delivered economic assistance to more than 55 million people.

The 2021 Annual Meetings in the Uzbek capital city of Tashkent welcomed over 4,000 delegates.