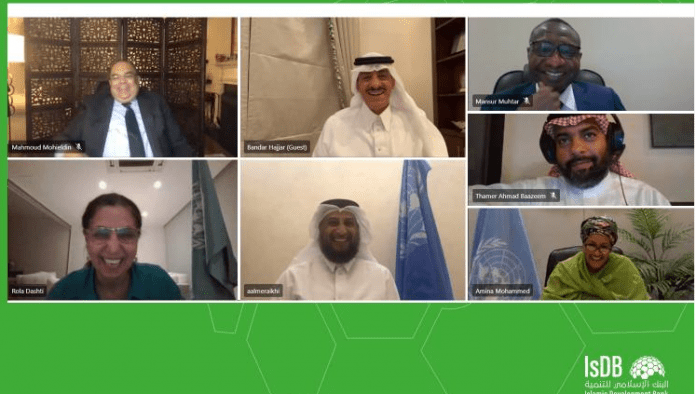 At the start of the meeting, the UN Deputy Secretary-General underlined the importance of Islamic Social Finance and commended the support provided by the Islamic Development Bank to the UN in this regard. “Working on ISF is something that we have been waiting to do together to address the scale of some of the issues,” she said adding: “We are very much looking forward to moving ahead with capacity building and knowledge sharing in this regard.”

Mrs. Amina Mohamed further commended the development efforts of the Islamic Development Bank especially in reaching out to the most vulnerable where the risks are higher.

At the meeting, Hajjar reaffirmed the significance of the International Dialogue on the Role of Islamic Social Financing (ISF) and expressed the readiness of the Bank to partner on all aspects of the Dialogue thus launching a global awareness campaign, especially on Zakat and Waqf.

Furthermore, he confirmed the Bank’s full alignment with the importance of leveraging ISF to mitigate the impacts of the raging COVID-19 pandemic including the production of COVID-19 vaccines to attend to developing and least developed countries.

Islamic Social Financing broadly comprises charitable traditional Islamic instruments such as Sadaqah (charitable giving) and Waqf (endowments and trusts) and Zakat (obligatory almsgiving). Only the annual Zakat contributions amount to around US$ 300 billion resources across the Islamic world.

Hajjar, then, underlined the need for immediate action via launching a joint campaign to mobilize Zakat and Sadaqah resources for boosting health infrastructures and vaccine production while considering the long-term need to build resilience through major ISF tools.

In light of the time restrictions to launch the ISF campaign within the remaining days of the holy month of Ramadan and in order to leverage the spirit of giving during the upcoming Eid, both sides agreed to launch the campaign via utilizing the available UN platforms.

The IsDB President also emphasized the crucial role that faith-based organizations can play in addressing the increasing financial gap to achieve Sustainable Development Goals (SDGs), a situation exacerbated by the ongoing global pandemic especially at a time when the ‘Decade of Action and Delivery’ is ushered in to achieve the SDGs.

Alleviating hunger, poverty and inequality, promoting peace and protecting the environment, which are part of the UN Sustainable Development Goals (SDGs) are also central to the core Islamic principles.

Since 2016, the UN has explored ways to harness the power of Islamic Social Finance to implement UN projects but more importantly, to align funding flows with the SDGs.