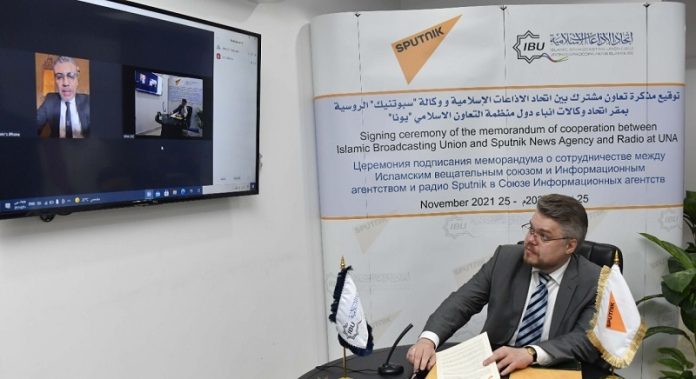 Jeddah (UNA-OIC) – The Islamic Broadcasting Union (IBU) and Russia’s Sputnik News Agency and Radio signed Thursday a memorandum of cooperation to enhance joint media work, at the headquarters of the Union of OIC News Agencies (UNA) in Jeddah, Saudi Arabia.

Leithy stressed that the agreement will contribute to strengthening the news exchange between audio-visual broadcasting institutions in Islamic countries and their Russian counterparts, given the fact that Sputnik agency delivers a wide range of news services on radio and online. He added that the agreement will also enable media discourse on topics of common interest, such as strengthening interreligious and intercultural dialogue and confronting hate speech and extremist ideology.

The IBU Director-General expressed his aspiration to visit Sputnik headquarters during the coming period to embark on discussing joint programs and activities, in serving the interest of both sides. He also expressed gratitude to UNA for hosting the signing ceremony, and to the Russian Permanent Representative to the Organization of Islamic Cooperation (OIC), Ramazan Abdulatipov, for his efforts in facilitating the signing of this memorandum.

In turn, Pushkov reiterated the great importance of IBU as an international incubator for audio-visual broadcasting corporations in the OIC countries. He pointed out that the memorandum signed today will allow Sputnik to support its media coverage of the Islamic world news, which is of constant interest to the agency and its various news platforms.