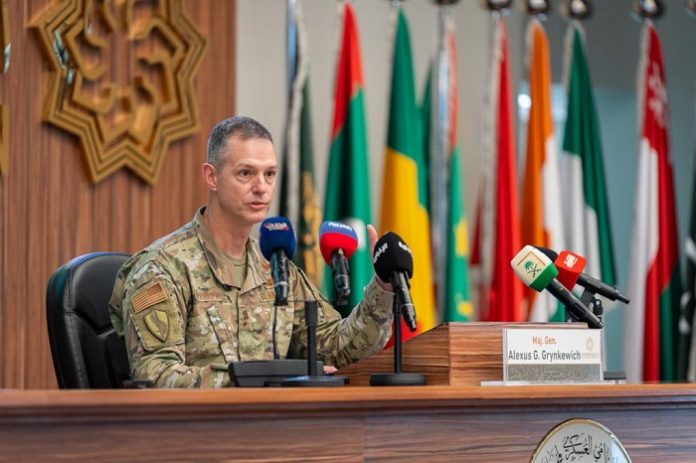 The event was attended by the IMCTC Acting Secretary-General, delegates of member countries, and IMCTC personnel as well as the US delegation accompanying Grynkewich, who pointed out that UAVs pose a national security threat to many countries due to their ubiquity, low cost of purchase, ease of manufacturing and the scale of damage they can cause.

He stated the fact that many countries as well as business entities manufacture UAVs and sell them for commercial purposes. “The danger of such drones lies in converting them from commercial and civilian use into military purposes by terrorist groups,” Grynkewich said.

“Many States and countries not only produce this technology, but also export it and send it to their proxies in other countries for subversive purposes,” he added.

The US official also referred to the difficulty of defending against drones because they can be programmed by terrorist groups to be launched from different directions, in addition to their small size, which makes it harder to defend because they can go undetected by radar equipment as they fly at low altitude.

Grynkewich concluded his presentation by pointing out that protection against such attacks lies in the early detection of UAVs at their warehouses and launching pads before being used. He stressed the importance of close cooperation and coordination among allied nations to be mindful of this peril and take the appropriate precautionary measures before the situation gets out of control, through sharing information and military expertise.

“Countries should have some control over their industrial production of UAVs to prevent them from falling into the hands of terrorist groups,” he said.

For his part, IMCTC Secretary-General Maj. Gen. Mohammed bin Saeed Al-Moghedi pointed out that this presentation comes within the framework of the joint, multi-faceted counterterrorism cooperation between IMCTC and the United States as a supporting country.