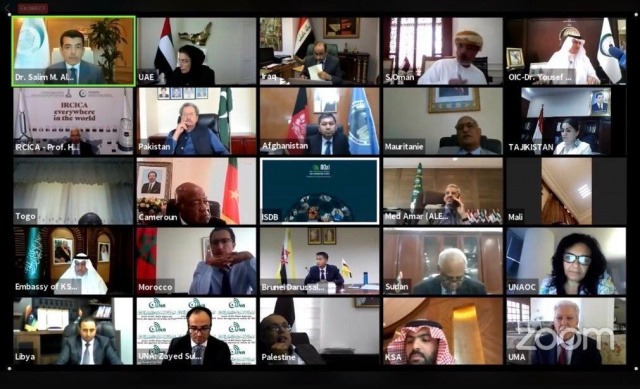 The Ministers of Culture taking part in the Extraordinary Virtual Conference of Culture Ministers of Member States of ICESCO, held by the Islamic World Educational, Scientific and Cultural Organization (ICESCO), under the theme “Sustainability of cultural action in the face of crises (Covid-19)”, reviewed the initiatives and experiences of their countries to ensure the continuity of cultural action. The ministers and the heads of the participating regional and international organizations lauded the cultural initiatives of ICESCO, most notably “ICESCO Digital Home” and “Distance Culture,” as well as the incentive awards of creativity.

During the first session, H.H. Prince Badr bin Abdullah bin Farhan, Minister of Culture of the Kingdom of Saudi Arabia, highlighted the importance of strengthening awareness of culture as well as its concerted efforts in reducing its effects caused by the pandemic, while commending the initiatives of the Kingdom to promote the part it plays in society through innovative models and its awareness that culture continuously evolves and able to adapt to the changing reality in all its transformations.

In her address, Dr. Ines Abdel-Dayem, Minister of Culture of the Arab Republic of Egypt, referred to the initiative of “Stay Home… Culture is in your hands” to provide cultural content on the Ministry’s channel on YouTube, which achieved great success and received significant attention with 27 million views until now.

On his part, Mr. Ozodbek Nazarbekov, Minister of Culture of the Republic of Uzbekistan, stated that the Ministry provided virtual lessons and presentations as well as 3-D visits to heritage sites, explaining that his Ministry adapted to the circumstances caused by the pandemic to ensure the continuity of the cultural action.

Mr. Othman El Ferdaous, Minister of Culture, Youth and Sports of the Kingdom of Morocco, highlighted several cultural initiatives launched by the Kingdom to reduce the repercussions of Covid-19 on the cultural sector. It includes the support programme for the producers of cultural contents with a budget of MAD100 million, in addition to partnerships with the national cultural institutions.

Ms. Raymonde Michèle Goudou Coffie, Minister of Culture and the Francophonie of the Republic of Cote d’Ivoire underscored the efforts geared towards facing the impacts of Covid-19 on the cultural activities and the initiatives to support the artists who were influenced by the closure of cultural institutions.

Moreover, Ms. Malika Bendouda, Minister of Culture of the People’s Democratic Republic of Algeria, pointed out to the initiatives of organizing virtual cultural contests, distance drawing workshops, and displaying documentaries and historical movies on the digital platforms, as well as organizing Virtual Days of Short Films.

In his address, Mr. Salem bin Mohammed Al Mahrouqi, Minister of Heritage and Culture of the Sultanate of Oman, highlighted that the Ministry formed a committee concerned with the economic issues during the crisis and reducing its repercussions on various fields, including culture and tourism.

Furthermore, Ms. Yumna Maumoon, Minister of Arts, Culture and Heritage of the Republic of Maldives, reaffirmed that her government cooperated with and supported artists to present virtual works, and used technologies to make culture accessible to people at Home.

Mr. Faisal Mohamed Saleh, Minister of Culture and Information of the Republic of the Sudan, also highlighted the importance of promoting the digital culture and encouraging businesses and the private sector to contribute to upgrading digital culture.

In addition, Mr. Shafqat Mahmood, Federal Minister of National Heritage and Heritage Literacy of the Islamic Republic of Pakistan, revealed that his country allocated a fund of one billion rupees to support artists, establish virtual music platforms and organize theater shows and virtual drama lessons.