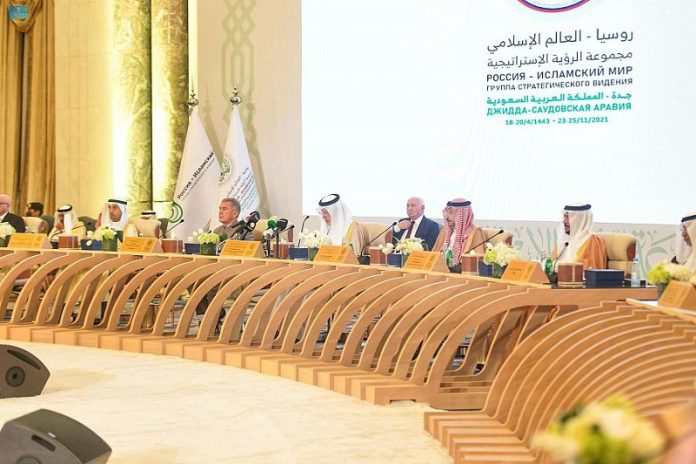 Jeddah (UNA-OIC) – Custodian of the Two Holy Mosques King Salman stressed the importance of the strategic meeting between the Islamic world and the Russian Federation in strengthening regional and international security and stability, intensifying means of dialogue among followers of religions and civilizations, and increasing joint cooperation in combating extremism and terrorism.

This came in King Salman’s speech delivered on his behalf by Prince Khalid Al-Faisal, Advisor to the Custodian of the Two Holy Mosques, Governor of Makkah Region, at the opening session of the meeting of the Group of Strategic Vision (GSV): “Russia – Islamic World”, which kicked off Wednesday in Jeddah under the theme “Dialogue and Prospects for Cooperation”, in the presence of Tatarstan President, GSV Chairman Rustam Minnikhanov, and with the participation of state officials, scholars and thinkers from Russia and the Islamic world.

“We are meeting today in the Makkah region, to be the second meeting of the esteemed Group in the country of the Two Holy Mosques and the landing place of the heavenly message and revelation,” Prince Khalid Al-Faisal said.

“I also welcome Rustam Minnikhanov, Chairman of the Group of Strategic Vision, President of the Republic of Tatarstan, wherein Islam has entered since the fourth century AH,” Al-Faisal said, adding that, since then, true Islamic education has continued to spread, especially with the establishment of the first Russian Islamic University in Kazan, the capital of the predominantly Muslim Republic of Tatarstan.

He went on to say: “The Kingdom stresses the importance of this strategic meeting between the Islamic world and the Russian Federation in enhancing regional and international security and stability, intensifying means of dialogue among followers of religions and civilizations, as well as increasing joint cooperation in combating extremism and terrorism.”

“Islam is a religion characterized by tolerance and moderation – that is why Islam gained acceptance among mankind of all races and ethnicities,” Prince Khalid Al-Faisal underscored.

Saudi Arabia has an honorable role in embracing the principles of moderation and coexistence, as it has striven to support regional and international efforts in this domain, he said, pointing out that the Kingdom has presented many initiatives in this regard, most notably, adopting the Makkah Document, and supporting the Office of the United Nations Alliance of Civilizations (UNAOC).

Al-Faisal also emphasized the Kingdom’s commitment to supporting any future efforts aimed at serving these principles, believing that difference does not mean discord and that tolerance calls for sublimity.

The Saudi-Russian relations are strong and historical dating back 95 years, he said, adding that “These relations have witnessed qualitative leaps in recent years, and culminated in high-level visits between the two countries, which resulted in the signing of many joint agreements in all economic, cultural and defense fields, and paved the way for the development of these relations and consolidating the level of trust between the two countries.”

The Kingdom shares with Russia several main principles, including respect for international legitimacy, establishing relations on the basis of mutual respect, sovereignty, independence and unity of states, and non-interference in internal affairs. Both the Kingdom and Russia are members of the Group of Twenty (G20) and the OPEC Plus group, which enabled them to work collectively within the framework of these two groups to enhance international cooperation.

Russia also shares the Islamic world’s embrace of solid principles, as they share a deep cultural heritage. This paves the way for activating the role of religious institutions, developing an environment that supports peaceful coexistence between followers of different religions and races, in addition to preserving the role of the family and spiritual values, and protecting human rights.

Russia also has deep-rooted strong relations with the Islamic world, and this is evident in its presence as an observer member of the Organization of Islamic Cooperation (OIC) for more than 15 years. This has resulted in fruitful cooperation with the Organization, Al-Faisal said.

He stated that Russia is home to as many as 20 million Muslims, who live in harmony with their societies and enjoy the right to practice their religious rites freely.

The dynamics of the relationship of Islamic countries with Russia are manifold and diverse, and usher in extending and strengthening bridges of scientific and technological cooperation in the fields of development, education, software, and applications of the Fourth Industrial Revolution.

Al-Faisal went to say that “the recent challenges facing our world have shown that we are all in one boat, no country or region is isolated from what is going on in the world. This applies to political conflicts, the spread of epidemics, economic stagnation, and climate change, in addition to many other global events and disasters.”

“From this point of view, the Kingdom calls on the countries of the Group of Strategic Vision to enhance joint cooperation to confront these challenges in order to get out with the least damage that may affect the future of our peoples, so that we may reach safety together.”

“Economic cooperation is the backbone of interdependence between the countries of the Islamic world and Russia, and there are favorable opportunities for the countries of the Group of Vision, to form solid economic partnerships in several areas, including halal products and Islamic finance, and we have to invest in them and work to develop them.”

“In conclusion, I hope that this Group will contribute to enhancing harmony between followers of religions, developing dialogue between civilizations and cultures, and protecting traditional, spiritual and family values ​​that are being blown today by the winds of change, which motivates us to confront them and align ourselves to ward off their dangers, to move at a steady pace towards progress and sublimity,” Prince Khalid Al-Faisal concluded.