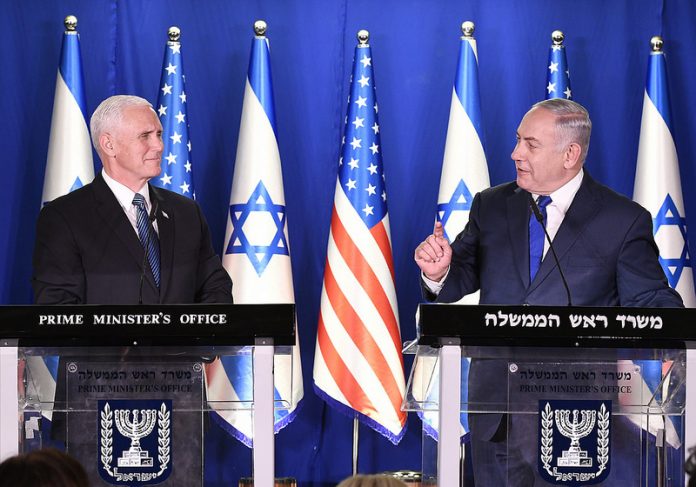 The current Israeli government expects unquestioned US support, a blind backing of the Christian Right and eternal solidarity of American Jews to last forever. This is a too narrow perspective for long-term planning.

Let us first examine US support to Israel, which is in now largely in President Donald Trump’s hands. Trump’s extra-permissive attitude toward the occupation, the moving of US embassy to Jerusalem and the punitive actions toward the Palestinians will not help Israel resolve its primary domestic problem: an erosion of democracy of a state with one set of rules for Jews and another for Palestinians.

Israel has managed to escape the wrath of international public opinion- for recent gunning down of Gaza protesters- by diverting global attention to the Syrian regime’s alleged use of chemical weapons and to Iran’s “threatening” presence in the region. While Tel-Aviv’s government announces new plans to expand illegal settlements in “Judea and Samaria” Prime Minister Netanyahu plays the deceptive role of a victim of Iran’s nuclear plots.

This week, with no success, the eloquent Prime Minister tried to push European leaders to follow President Trump’s action on Iran and withdraw from the international nuclear deal. But Europe has stopped listening to Netanyahu. As a result, many in Israel are no longer happy with Brussels’ Mideast policies. Ben-Dror Yemini, Israel’s Ynet columnist, laments his countries’ gradual decline of international support: .. we are losing in the international battlefield. Mainly in Europe, but also in the United States, where the Democratic Party is becoming a European branch concerning Israel. And the Democrats will rise to power again sometime, maybe even in the not-so-distant future.[1]

Yemini is perceptive. The Democrats might very well retake the White House and help save Israel from its short-sighted leaders. But regardless of who wins the 2020 presidential race, Israel has been receiving the unimaginable from Washington due to the blessings of both US political parties. The implications are clear for long-term planning: “do not lose bipartisan support”.

In embracing the Trump Administration Israel’s leaders are definitely alienating the Democrats. In Why the Democrats are abandoning Israel professor K.C. Johnson [of Brooklyn College] explains that in a party organizing the next presidential election around anti-Trump policies, being pro-Israel for Americans has become an electoral risk. The majority of the Democratic base has become attentive or sympathetic to the Palestinian suffering.[2]

The alliance between Trump and Netanyahu is not based on pure sentiments. There are striking parallels between these two unusual leaders: both are under investigation for the possible crime, both exploit nationalistic sentiments, both continuously search for an adversary to demonize and both are moving further toward the extreme Right.

Israel deserves better friends in the White House. We have a president who has gone the whole-hog for Israel largely because he needs its lobby in Washington; he also seeks the support of the powerful Christian Right.

The second area, that Israel has to watch, is its risky dependence on the religious Right to justify its occupation- of what is left of historic Palestine. But, at the end of the day, the Evangelicals are not able to help Israel suppress the aspirations of six and a half million Palestinians living between the Jordan River and the Mediterranean Sea – under Israeli rule, occupation or control. By embracing the US Evangelical leadership, the Israeli establishment is effectively causing mainline Christians to distance themselves from Tel-Aviv policies. The Presbyterian, Methodist, Episcopal, liberal Catholic and many other mainstream churches, in America and in Europe, are now in solidarity with the Palestinians. It is sad to see that the traditional healthy and warm relations between ordinary Christians and Jews, which exist in the context of a deep-rooted Judeo-Christian culture, have been marginalized by political bonding between provocative Christian leaders – such as Pastors John Hagee and Jerry Falwell Jr. – and the Israeli establishment.

In my thirteen year service as the Director of the Middle East Desk at the World Council of Churches (WCC), which is an ecumenical international body of over 300 churches, I witnessed a genuine dialogue between Christians and Jews worldwide. It is also perturbing that the ecumenical churches, which have sincere relations with Judaism and its adherents, are now being attacked by the Netanyahu government for allegedly being “anti-Semitic”, simply for being critical of the occupation. Yet Christian leaders, whose exclusive theology is anti-Jewish and anti-Muslim, are currently dominating Christian-Jewish relations.

Most Israelis are probably well aware that their close relations with the fundamental Christians are pragmatic, temporary and political rather than spiritual. This notion of “pragmatic” politics is a lead to the third area of reliance on questionable partnerships.

The majority of American Jews are liberal Democrats. J Street polls reveal that “Jewish voters are firmly on the progressive side of the national divide with a 70% to 25% Democrat-to-Republican margin”.[3]

The American Jewish Diaspora is well educated; consequently, this community will probably not tolerate for too long an overdose of cognitive dissonance. The dissonance is partly in being authentically Jewish and being too close to narrow-minded Christians. Not to mention how distant the mindset of ordinary American Jews is from a fundamentalist Christians- on questions of justice and human rights.

Israel’s leaders must realize that without the backing of the Jewish Diaspora, the bipartisan US support and the strong bonding between Jews and mainline Western Christianity their state will not thrive. Israel’s future security is vitally dependent on a clear vision, the right choice of partners and internally consistent political planning.