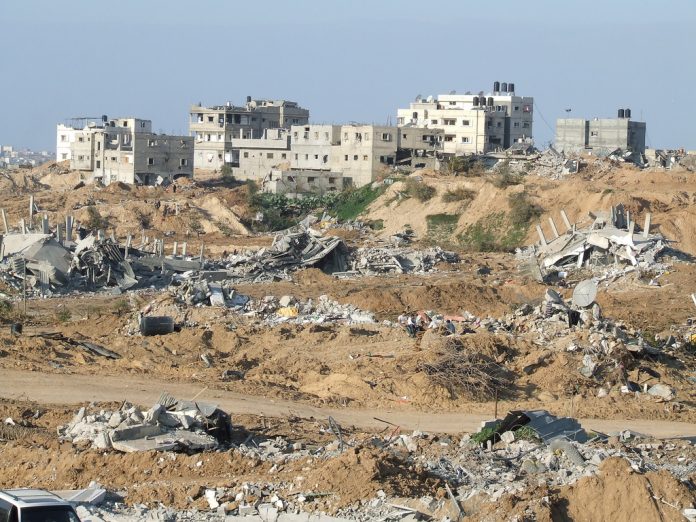 On Monday and Tuesday, Palestinians commemorate the anniversary of the Nakba, or catastrophe, their mass expulsion and dispossession 70 years ago as the new state of Israel was built on the ruins of their homeland. As a result, most Palestinians were turned into refugees, denied by Israel the right to return to their homes.

Tens of thousands turned out on Monday in the occupied territories to protest against seven decades of Israel’s refusal to make amends or end its oppressive rule.

The move on Monday of the US embassy to Jerusalem, a city under belligerent occupation, has only inflamed Palestinian grievances – and a sense that the West is still conspiring in their dispossession.

The focus of the protests is Gaza, where unarmed Palestinians have been massing every Friday since late March at the perimeter fence that encages two million of them. For their troubles, they have faced a hail of live ammunition, rubber bullets and clouds of tear gas. Dozens had been killed and many hundreds more maimed, including children.

Early reports on Monday suggested that Gaza’s demonstrators were being massacred by the Israeli army. Amnesty International called the events a “horror show”.

But for more than a month, Israel has been working to manage western perceptions of the protests – and its response – in ways designed to discredit the outpouring of anger from Palestinians. In a message all too readily accepted by some western audiences, Israel has presented the protests as a “security threat”.

Israeli officials have even argued before the country’s high court that the protesters lack any rights – those army snipers are entitled to shoot them, even if facing no danger – because Israel is supposedly in a “state of war” with Gaza, defending itself.

On Sunday night the Israeli air force dropped leaflets across Gaza warning Palestinians not to go near the fence. “The Israel Defense Forces is determined to defend Israel’s citizens and sovereignty against Hamas’ attempts at terrorism under cover of violent riots,” the leaflets said. “Don’t get near the fence and don’t take part in Hamas’ show, which endangers you.”

Many Americans and Europeans, worried about an influx of “economic migrants” flooding into their own countries, readily sympathise with Israel’s concerns – and its actions.

Until now, the vast majority of Gaza’s protesters have been peaceful and made no attempt to break through the fence.

But Israel claims that Hamas has exploited this week’s protests in Gaza to encourage Palestinians to storm the fence. The implication is that the protesters have been trying to cross a “border” and “enter” Israel illegally.

The truth is rather different. There is no border because there is no Palestinian state. Israel has made sure of that. Palestinians live under occupation, with Israel controlling every aspect of their lives. In Gaza, even the air and sea are Israel’s domain.

Meanwhile, the right of Palestinian refugees to return to their former lands – now in Israel – is recognised in United Nations Resolutions.

Nonetheless, Israel has been crafting a dishonest counter-narrative ever since the Nakba, myths that historians scouring the archives have slowly exploded.

One claim – that Arab leaders told the 750,000 Palestinian refugees to flee in 1948 – was in fact invented by Israel’s founding father, David Ben Gurion. He hoped it would deflect US pressure on Israel to honour its obligations to allow the refugees back.

Even had the refugees chosen to leave during the heat of battle, rather than wait to be expelled, it would not have justified denying them a right to return when the fighting finished. It was that refusal that transformed flight into ethnic cleansing.

In another myth unsupported by the records, Ben Gurion is said to have appealed to the refugees to come back.

In truth, Israel defined Palestinians who tried to return to their lands as “infiltrators”. That entitled Israeli security officials to shoot them on sight – in what was effectively execution as a deterrence policy.

Nothing much has changed seven decades on. A majority of Gaza’s population today are descended from refugees driven into the enclave in 1948. They have been penned up like cattle ever since. That is why the Palestinians’ current protests take place under the banner of the March of Return.

For decades, Israel has not only denied Palestinians the prospect of a minimal state. It has carved the Palestinian territories into a series of ghettos – and in the case of Gaza, blockaded it for 12 years, choking it into a humanitarian catastrophe.

Despite this, Israel wants the world to view Gaza as an embryonic Palestinian state, supposedly liberated from the occupation in 2005 when it pulled out several thousand Jewish settlers.

Again, this narrative has been crafted only to deceive. Hamas has never been allowed to rule Gaza, any more than Mahmoud Abbas’s Palestinian Authority governs the West Bank.

But echoing the events of the Nakba, Israel has cast the protesters as “infiltrators”, a narrative that has left most observers strangely indifferent to the fate of Palestinian youth demonstrating for their freedom.

Once again, the executions of recent weeks, supposedly carried out by the Israeli army in self-defence, are intended to dissuade Palestinians from demanding their rights.

Israel is not defending its borders but the walls of cages it has built to safeguard the continuing theft of Palestinian land and preserve Jewish privilege.

In the West Bank, the prison contracts by the day as Jewish settlers and the Israeli army steal more land. In Gaza’s case, the prison cannot be shrunk any smaller.

For many years, world heads of state have castigated Palestinians for using violence and lambasted Hamas for firing rockets out of Gaza.

But now that young Palestinians prefer to take up mass civil disobedience, their plight is barely attracting attention, let alone sympathy. Instead, they are criticised for “breaching the border” and threatening Israel’s security.

The only legitimate struggle for Palestinians, it seems, is keeping quiet, allowing their lands to be plundered and their children to be starved.

Western leaders and the public betrayed the Palestinians in 1948. There is no sign, 70 years on, that the West is about to change its ways.