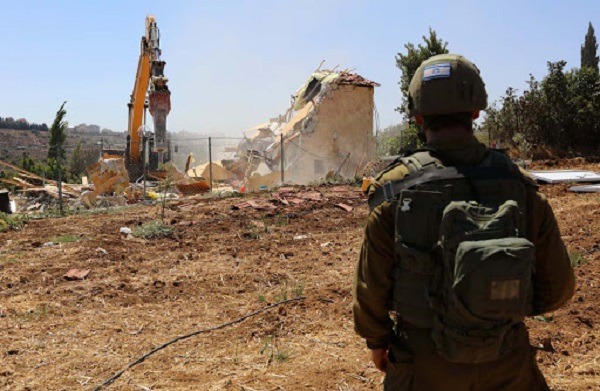 Bethlehem (UNA-OIC) – Israeli forces today demolished two structures and seized a plot of land in the southern district of Bethlehem, according to sources.

Ahmad Salah, a media activist, told WAFA that Israeli forces forced their way to the area between al-Khader town and Beit Jala city, south and west of Bethlehem, where they tore down a shack and a car wash purportedly for being built without permits.

Meanwhile, Israeli soldiers seized a plot of land, located to the east of Tuqu’ town, east of the city.

Director of the Wall and Settlement Resistance Commission Office in Bethlehem, Hassan Breijieh, told WAFA that the soldiers seized a donum of land in order to expand a nearby military camp at the northern entrance of the town.

Israel demolishes Palestinian houses and structures almost on a daily basis as a means to achieve “demographic control” of the occupied territories.

Israel denies planning permits for Palestinians to build on their own land or to extend existing houses to accommodate natural growth, particularly in Jerusalem and Area C, which constitutes 60 percent of the occupied West Bank and falls under full Israeli military rule, forcing residents to build without obtaining rarely-granted permits to provide shelters for their families.

In contrast, Israel argues that building within existing colonial settlements is necessary to accommodate the “natural growth” of settlers. Therefore, it much more easily gives the estimated 550,000 Jewish Israeli settlers there building permits and provides them with roads, electricity, water and sewage systems that remain inaccessible to many neighboring Palestinians.

Soldiers in the oxymoronically named Civil Administration, the name Israel gives to the body administering its military occupation of the West Bank, determine where Palestinians may live, where and when they may travel (including to other parts of the occupied territories like Gaza and East Jerusalem), whether they can build or expand homes on their own land, whether they own that land at all, whether an Israeli settler can takeover that land among others.