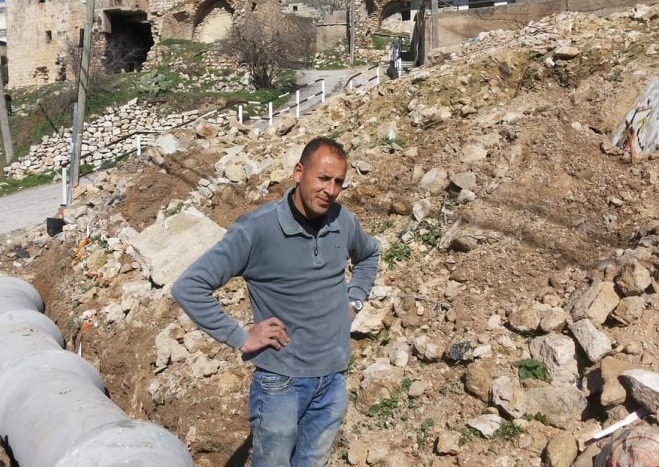 Shadi Salim, a municipal water technician, was gunned down by Israeli forces near the entrance of Beita. (WAFA Images)

WAFA correspondent reported that Israeli troops gunned down Shadi Omar Lotfi Salim, 41, near the entrance of the town, which has become a scene of weekly protests against decades of Israeli settler-colonialism and apartheid. He added that the soldiers used an ambulance to evacuate Salim’s body, which is still withheld by the occupation authorities.

Although there had been no protests in the area on Tuesday night, the Israeli military claimed that Salim “approached the soldiers in a menacing manner while holding what appeared to be an iron bar” before being gunned down.

Member of Beita Municipality, Abdul-Mun‘im Issa, said that Salim, a municipal water technician, went to open the water main supplying water to the town before being gunned down.

The Israeli water company of Mekorot, which has a monopoly on the excavation, restoration, distribution and selling of water, allocates minimal water to Palestinian villages and cities in contrast to generous quantities to settlers in the West Bank.

The villagers of Beita have been protesting the building of the new colonial settlement outpost of Givat Eviatar atop Jabal Sabih (Sabih Mountain), near the town, and the pillage of their land in defiance of Israeli and international law.

The construction of the two colonial outposts atop Mount Sabih, south of Beita, and Mount Al-Arma, north of the town, besides to a bypass road to the west is an Israeli measure to push Palestinian villages and towns into crowded enclaves, ghettos, surrounded by walls, settlements and military installations, and disrupt their geographic contiguity with other parts of the West Bank.

The number of settlers living in Jewish-only colonial settlements across occupied East Jerusalem and the West Bank in violation of international law has jumped to over 700,000 and colonial settlement expansion has tripled since the signing of the Oslo Accords in 1993.