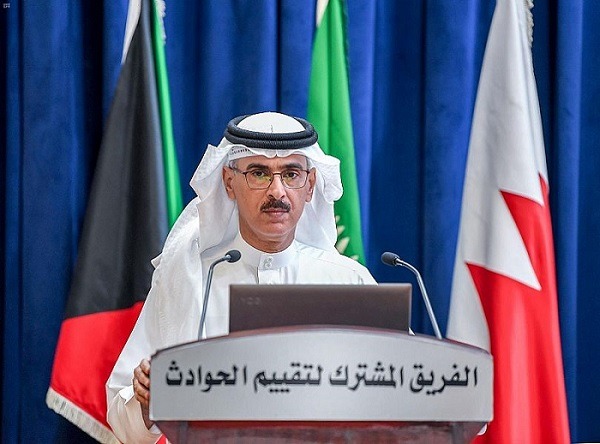 Riyadh (UNA-OIC) – The Official Spokesman of the Joint Incidents Assessment Team (JIAT) in Yemen Legal Counsellor, Mansour Al-Mansour refuted a number of claims raised by United Nations bodies and international organizations on errors allegedly committed by the Coalition Forces to Support Legitimacy in Yemen during their military operations in Yemen.
In a press conference held at the Armed Forces Officers’ Club in Riyadh on Wednesday, Al-Mansour reviewed the results of assessing four incidents included in those claims as follows:
With regard to the report (UN Coordinator and Humanitarian Coordinator for Yemen) issued (July 13, 2020) that Coalition Forces carried out an airstrike in “Al-Washha” directorate of “Hajjah” governorate on (12/07/2020), killing seven children and two women, and injuring two children and two women who were rescued to “Abs” hospital. The JIAT vetted the incident, and reviewed all documents, including daily mission schedule, air tasking orders, after mission report, interviewing and listening to those concerned, surveillance and reconnaissance system video recordings, satellite images of the targeted site, operational reports, intelligence reports, summary of electronic warfare activity of wireless communications, Coalition Forces rules of engagement, provisions and principles of International Humanitarian Law and its customary rules, and after assessment of evidence, JIAT found that Coalition Forces received intelligence reports about a building with (2) communications masts on top of it, and the Houthi armed militia are using that building as “command and communications center” to direct combat operations.
https://www.spa.gov.sa/viewfullstory.php?lang=en&newsid=2161522#2161522