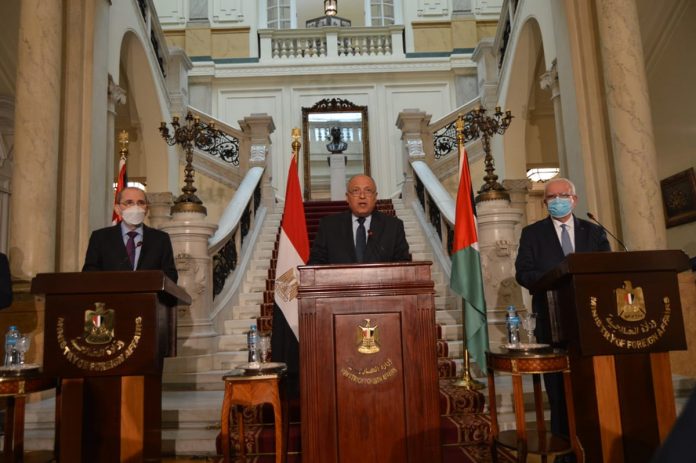 Cairo, (UNA-OIC) – Jordanian Minister of Foreign Affairs and Expatriates, Ayman Safadi, urged on Saturday acting against the Israeli illegal measures in the occupied West Bank and Jerusalem that undermine the prospects of a two-state solution to the Palestinian-Israeli conflict.

Safadi, who is also the deputy prime minister, highlighted that several necessary actions were agreed on in the meeting to address the challenges facing the Palestinian cause.

“There is an absence in the political horizon, and there is a stalemate in the negotiations process. There are illegal Israeli measures that undermine all prospects for achieving a just and comprehensive peace, which the two-state solution would be the only way to that end,” Safadi explained.

He said that the demolition of Palestinian homes, the expropriation of their homes and the violation against the Al-Aqsa Mosque / Al-Haram Al-Sharif, are some of the Israeli illegal and dangerous measures that undermine all chances for materializing just peace.

This reality “calls for working together to mobilize an international position to compel these measures and for crystalizing a proposal that can deal with them, and finding a political breakthrough that would take us back to the negotiating table based on the international law …,” he added.

He highlighted that negotiation could be held under the auspices of the international quadruple committee that “represents an internationally agreed on the mechanism that we fully support, and we hope that it convenes and move ahead toward negotiations as a way to reaching the peace that we want.”

“Our meeting today discussed how to take action together with our brothers in the Arab world and our partners in the international community to mobilize an action toward relaunching negotiations,” Safadi added.

Safadi said that the state of Palestine is the sovereign in Jerusalem, and Jordan is the custodian over the holy sites in Jerusalem. He emphasized that protecting Jerusalem and its sanctities is a Palestinian, Jordanian, Egyptian, Muslim, Arab and international responsibility, warning that tampering with sanctities in the Holy City provokes the “feelings of Muslims and Christians.”