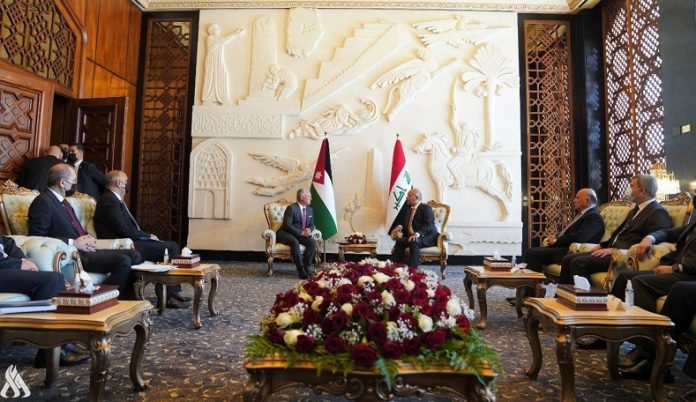 Baghdad (UNA-OIC) – King Abdullah II of Jordan arrived Sunday in Baghdad to head the Jordanian delegation participating in the fourth trilateral summit with Egypt and Iraq.

King Abdullah, upon arrival at Baghdad International Airport, was received by Iraqi President Barham Salih and a number of senior Iraqi officials, as well as Ambassador of Jordan to Iraq Montaser Al Zoubi and embassy staff.

The two leaders also held a meeting at the airport and expressed pride in the advanced relations between their countries and peoples. They further underlined keenness to bolster ties across all fields.

King Abdullah reaffirmed Jordan’s support for Iraq and its people in safeguarding their security and stability.

The two leaders discussed the latest regional and international developments, foremost of which is the Palestinian cause. In this regard, they agreed on the need to maintain close coordination and consultation on issues of mutual concern in serving shared interests and Arab causes.