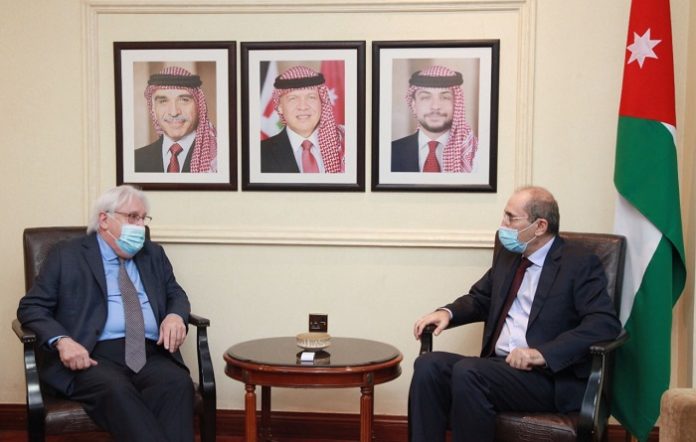 Safadi stressed the need to step up international efforts to end the Yemeni crisis, whose humanitarian repercussions have exacerbated, through a political solution in accordance with UN Security Council Resolution 2216 and the approved references.

The Jordanian minister stressed the need to implement the Stockholm Agreement, the Hodeidah Agreement and the Saudi Initiative, in order to reach a political solution in Yemen that restores its security and stability and ends the sufferings of the Yemeni people.

Reiterating Amman’s condemnation of all terrorist acts carried out by the Houthis, which target Saudi Arabia and its security, Safadi said security of Saudi Arabia and the Arab Gulf states is “an integral part of Jordan’s”. In this regard, the Jordanian minister also affirmed the Kingdom’s solidarity with Saudi Arabia in all the steps taken to protect its security.

Safadi thanked Griffiths, who will finish his tenure at the end of June, to assume new duties as Under-Secretary-General of the United Nations for Humanitarian Affairs, for his “tireless” efforts and “continuous” pursuit to end the Yemeni crisis over the past three years.

For his part, Griffiths valued the Kingdom’s “continued” support for the United Nations Mission in Yemen for hosting its headquarters, and lauded Amman’s “pivotal” role, under the King’s leadership, in its efforts to resolve conflicts and regional crises and establish security and stability in the region.