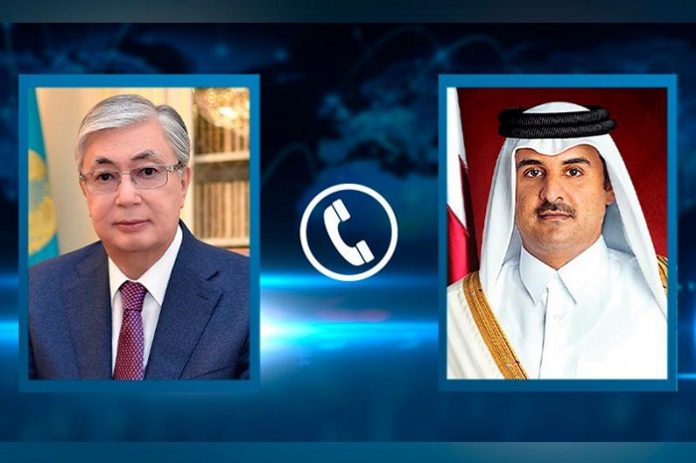 The heads of state exchanged congratulations on the holy month of Ramadan and wished the peoples of Kazakhstan and Qatar prosperity and well-being.

Tokayev and Sheikh Tamim thoroughly discussed the prospects for the development of bilateral relations and reaffirmed their commitment to expanding multilateral cooperation. They also noted the existence of significant potential and resources for filling the Kazakh-Qatari cooperation with new content.

President Tokayev proposed to intensify cooperation between the governments and business circles of the two countries and to form a separate list of joint investment projects. He stressed that the priority areas of cooperation are agriculture, geological exploration and mining, transport and logistics, as well as finance and the banking sector.

For his part, Sheikh Tamim Al Thani expressed Qatar’s interest in developing multifaceted economic and investment cooperation with Kazakhstan. He said it was preferable to prepare several major investment projects that would become a distinctive driving force of bilateral cooperation.

Besides, the two parties touched upon the measures taken by both governments of Kazakhstan and Qatar in the fight against the spread of COVID-19. In this regard, Sheikh Tamim commended the achievement of Kazakh scientists in developing COVID-19 vaccines, which allowed Kazakhstan to enter the top 10 countries that produce their own vaccine and the top five countries that have registered their scientific development.

At the end of the telephone conversation, Sheikh Tamim ​Al Thani expressed gratitude for the invitation to pay a visit to Kazakhstan.