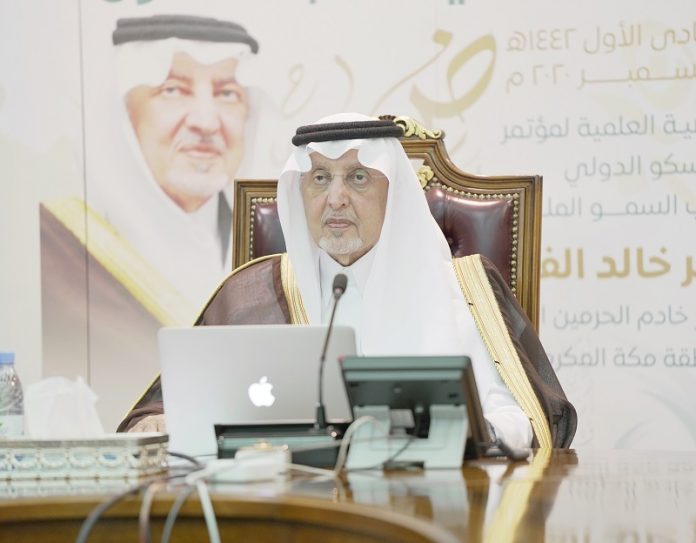 Jeddah, Saudi Arabia (UNA) – On the occasion of the World Arabic Language Day, and after the approval by the Custodian of the Two Holy Mosques, King Salman Bin Abdulaziz, the adviser to the Custodian of the Two Holy Mosques and governor of the region of Makkah Al-Mukarramah, Prince Khaled Al-Faisal, has been chosen as “Main guest of ICESCO International Conference on the Arabic Language”, organized in cooperation with King Abdulaziz University in Jeddah, Saudi Arabia.

This is what emerges at the launch of an international conference on Monday, under the theme “The Arabic language … perspectives in a changing world”.

Prince Khaled Al-Faisal underlined in his speech at the conference attended by the former President of the Republic of Mauritius, ministers, university presidents, heads of Arabic language departments, thinkers and researchers from different parts of the world, that “God honored me, then the Custodian of the Two Holy Mosques, to serve the holy house, so I dedicated my life to serve the language of the Holy Quran and the Muslims at this time and in this place. Why not ? Because it is the pinnacle of the clarification and the identity of the human being. Then ICESCO honored me in Rabat. Thanks to everyone who honored me, and thanks to those who nominated me, and to those who supported me. O Allah make me one of those who remain grateful, and have benefited from the lessons of their current life. If they speak, they manage to be brief and understandable”.

The choice of Prince Khaled Al-Faisal as the main guest of the conference at its session, follows his achievements and efforts in the service of the Arabic language, and on this occasion, a session will be held todays, Tuesday, during which his efforts to serve the Arabic language and promote Arabic culture will be discussed.

Attending the session will be Dr Abdullah Bin Salem Al-Maatani, and head of the General Presidency for the Affairs of the Two Holy Mosques, Al-Haram and Prophet Mosque Affairs, Dr Abdul-Rahman Bin Abdulaziz Al-Sudais. It will be led by the president of King Abdulaziz Center for National Dialogue, Secretary General of King Faisal International Prize, Dr Abdulaziz Bin Muhammad Al-Sabeel.