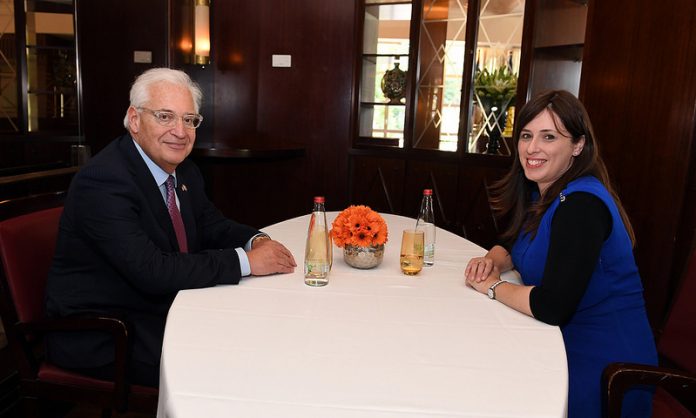 ZIONISM IS an anti-Semitic creed. It was so right from the beginning.

Already the founding father, Theodor Herzl, a Viennese writer, penned some pieces with a clear anti-Semitic slant. For him, Zionism was not just a geographical transplantation, but also a means of turning the despicable commercial Jew of the Diaspora into an upright, industrious human being.

Herzl traveled to Russia in order to win the support of their anti-Semitic, pogrom-inciting leaders for his project, promising to take the Jews off their hands.

Indeed, it was always the main plank of Zionist propaganda that only in the future Jewish state will Jews be able to live a normal life. The slogan was to “overturn the social pyramid” – putting it on a sound basis of workers and farmers, instead of speculators and bankers.

When I was a schoolboy in (then) Palestine, everything we learned was soaked with a profound contempt for “exile Jews”, those Jews everywhere who preferred to stay in the Diaspora. They were definitely much inferior to us.

The climax was reached by a small group in the early 1940s, who were nicknamed “Canaanites”. They proclaimed that we were a new nation altogether, the Hebrew nation, and that we had nothing to do with Jews anywhere. When the full scope of the Holocaust became known, these voices were lowered, but not silenced.

THE ANTI-SEMITES, on their part, always preferred the Zionists to other Jews. Adolf Eichmann famously declared that he preferred to deal with the Zionists because they were more “biologically valuable”.

Even today, Jew-haters everywhere loudly applaud the State of Israel, as evidence that they are not anti-Semites. Israeli diplomats are not averse to utilizing their support. They love the alt-right.

This never prevented the State of Israel from exploiting the support of world Jewry. Long ago there used to be a joke: God Almighty divided his bounty justly between the Arabs and the Israelis. He gave the Arabs oil, which provided them with economic and political clout, and He provided the Israelis with world Jewry, for the same purpose.

In the early days of the State of Israel, it desperately needed the money of American Jews – literally to buy next month’s bread. Prime Minister David Ben-Gurion was persuaded to go to the US to woo them. But there was a problem: Ben-Gurion, an arch-Zionist, was determined to tell them to leave everything and come to Israel. His aides had a hard time convincing him please not to mention aliyah (immigration, literally “to go up”).

THE UNEVEN relationship prevails to this very day. Israelis secretly despise American Jews for preferring the “fleshpots of Egypt” to living like upright people in the Jewish State, but demand their unconditional political support. Most American Jewish organizations do provide this. They wield huge power in Washington DC, where AIPAC, the Zionist lobby, is considered the second most powerful political organization after the National Rifle Association.

Unfortunately, the relationship creates more and more problems which cannot be hidden anymore.

THE LATEST outburst came from an unexpected source. It bears an unusual name: Tzipi Hotovely. Hers is a Georgian name. Her parents did indeed emigrate (or “make aliyah”) from that former Soviet republic. (Since in the Hebrew script vowels are not written, few Israelis know how to pronounce this name correctly.)

Tzipi (diminutive of Tzipor, bird) is both an intelligent and beautiful woman of 39. She is also an extreme rightist. Her outlook is a combination of radical nationalism and orthodox religion. She is, of course, a member of the Likud. This helped her to reach the high position of Deputy Foreign Minister.

So who is the foreign minister? Nobody. Netanyahu is much too clever to appoint anyone to this high position, lest he or she become a competitor. This elevates Tzipi’s standing.

Generally, Hotovely keeps quiet. But a few weeks ago, she threw a virtual bomb.

In an interview with an American outlet, the Israeli deputy foreign minister viciously attacked American Jewry, repeating old anti-Semitic slogans. Among other things, she blasted the American Jews for not sending their sons to the US army. As a result, she said, they are unable to understand Israelis, whose sons are fighting every day.

This is an old accusation. I remember seeing a Nazi leaflet dropped from German planes over the American lines in France during World War II. It showed a fat, cigar-puffing Jew sexually molesting a pure Aryan American woman, with the inscription: “While you are shedding your blood in Europe, the Jew is raping your wife back home!”

The accusation itself is, of course, nonsense. The draft has long since been abolished in the US. The US army consists of lower-class volunteers. Jews generally do not belong to these.

Hotovely has been widely condemned, but was not dismissed. She continues to be in charge of all Israeli diplomats.

THIS INCIDENT was only the latest in a long series of troubles in the relations between the two communities.

Right from the beginning, the State of Israel has sold many religious privileges to the Israeli Orthodox establishment, whose votes in the Knesset were and are essential for putting together a governing coalition.

In Israel, there is no civil marriage. All marriages are religious. If an Israeli Jewish man wants to marry a Christian or Muslim woman – a rare occurrence – they must go to neighboring Cyprus marry. Foreign marriages are recognized.

But in modern Judaism, there are several religious communities. In the US, the main communities are liberal – Reform Judaism and Conservative Judaism. These are hardly recognized in Israel. All marriages are strictly Orthodox. So is the overseeing of kosher establishments, a hugely lucrative enterprise.

This means that the main streams of American Judaism have practically no rights in Israel. They hardly exist here.

As if this was not enough, there is a vicious conflict about the Western Wall, the holiest Jewish site. It is considered the only remnant of the Jewish temple, which was destroyed by the Romans some 2100 years ago. (Actually, it is only a remnant of an outer supporting wall.)

While belonging in theory to all Jews, the Israeli government has turned this holy place over to the Orthodox establishment, which allows only males to approach it. The reform community and women’s organizations protested, and at long last a compromise was reached, which reserves the main part of the wall for the orthodox, but leaves a separate part to women and reform Jews. Now the government has annulled this compromise.

THE BASIC trouble is that the entire relationship between Israelis and Diaspora Jews is built on a lie: the belief that they are the same people. They are not.

They have a strong feeling of belonging to each other, of a joint heritage and of family ties. But they are different.

The sooner the two sides recognize this officially, the better it is for both. American Jews can support Israel, as – say – Irish Americans can support Ireland, but it’s up to them. They don’t owe allegiance to Israel and are not obliged to pay us tribute.

Israel, on its part, can help Jews anywhere when they are in trouble, and allow them to join us. Welcome.

But we do not belong to a joint nation. We in Israel are a nation composed of Israeli citizens. American and other Jews are part of their respective nations and of the worldwide Jewish ethnic-religious community.

Netanyahu would like to be, like Queen Victoria, “king and emperor” – King of Israel and Emperor of the Jews.