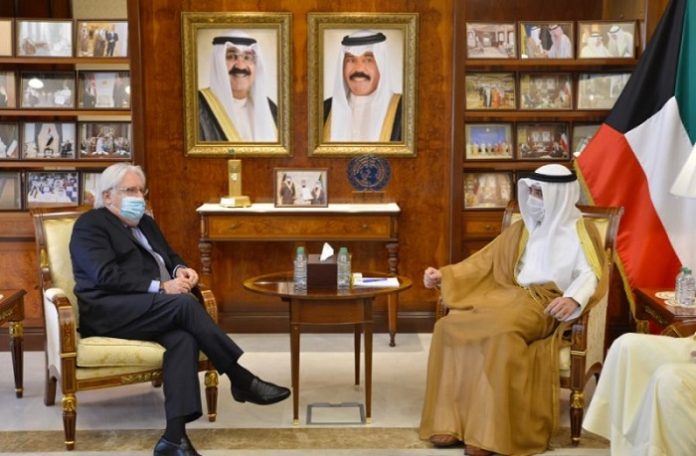 Kuwait (UNA-OIC) – Kuwait Foreign Minister and Minister of State for Cabinet Affairs Sheikh Dr. Ahmad Nasser Mohammad Al-Sabah reaffirmed support to Yemen’s unity and stability, as well as all efforts towards sustainable peace in the country.

Sheikh Dr. Ahmad made the remarks as he met with UN Special Envoy for Yemen Martin Griffiths, who is currently visiting Kuwait.

The Kuwaiti official underlined the importance of the Saudi peace initiative to end fighting in Yemen, the GCC Initiative and its implementation mechanism, the outcome of national dialogue and UN Resolution 2216 to achieve peace in Yemen. He also reaffirmed Kuwait’s support for the UN Special Envoy’s peace endeavors in Yemen.

For his part, Griffiths briefed Sheikh Ahmad about the latest developments in Yemen. He expressed gratitude for Kuwait’s humanitarian contributions to Yemen, as well as its efforts to reaching security and stability in the war-stricken country, and alleviating the suffering of the Yemeni people.

Meanwhile, the Kuwaiti official condemned the systematic attacks by the Houthi militias against Saudi Arabia, describing them as “a direct threat” to the Gulf and Arab national security. He reaffirmed that the State of Kuwait stands firmly by the Kingdom in preserving its security and stability.